2019 was a major inflection point for virtual reality 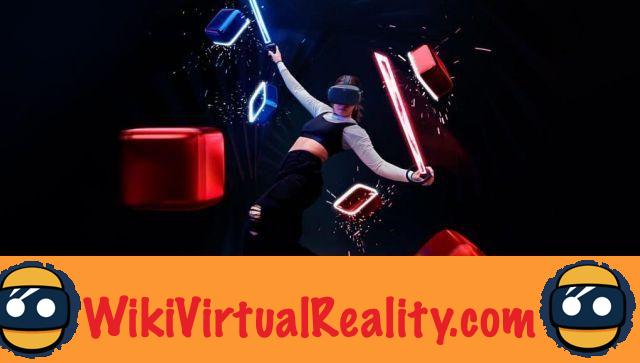 The adoption of virtual reality is accelerating and 2019 has truly been a pivotal year. The numbers speak for themselves. It is true that the release of the Oculus Quest has boosted mainstream adoption.

The adoption of virtual reality is accelerating thanks in particular to the Oculus Quest. We've seen over 100 VR titles go over $ 3 million in revenue. The total VR software market jumped 2019 times in 10. Top VR titles grossed $ 60 million in revenue and some even as high as $ XNUMX million. Although still small, virtual reality is a growing and sustainable industry for both developers and manufacturers of headsets.. 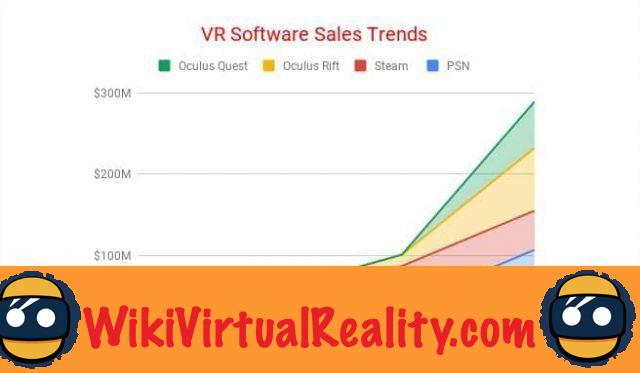 2019 a pivotal year for virtual reality

Venture Reality Fund has analyzed the field of virtual reality and, although it is difficult to obtain data on the mainstream market for the sale of headsets (only Sony publishes its figures), analysis of software sales offers very interesting data. Oculus proved VR is more than a product when they officially released numbers on their ecosystem in September 2019 during Oculus Connect 6.

During the convention, the Facebook subsidiary announced that sales of virtual reality software on their platform had exceeded $ 100 million including $ 20 million from the Oculus Quest ecosystem alone, launched only four months ago. This is not the only signal we have, however, that virtual reality is a growing and sustainable platform. 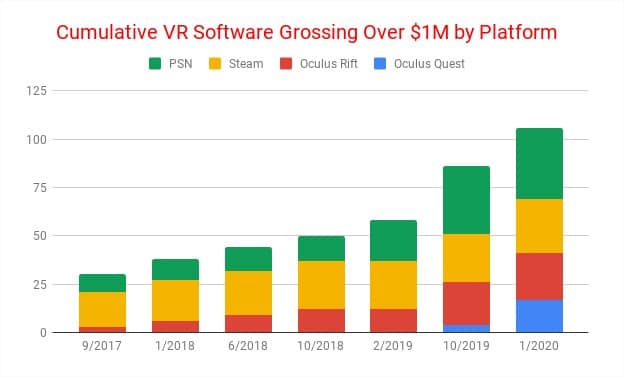 The analysis company was based on the sales figures given by certain virtual reality game studios but also made an extrapolation from the Oculus (Rift and Quest), Steam and the PlayStation Store platforms based on user reviews. The study showed that 2019 was an inflection point for technology with a real jump in sales. The launch of the Oculus Rift S, Quest, and many blockbuster games like Asgard's Wrath and the hugely successful Beat Saber have contributed a lot to this.

Experts assure that Oculus is one of the main growth vectors of the market during the past year. They also ensure that when virtual reality software exceeds a million dollars in profit, it shows that the market is healthy and should attract new studios. 100 titles would have now surpassed this milestone and one title (probably Beat Saber) would have totaled $ 40 million in annual revenue in 2019. Notably, the majority of these successful titles were designed by independent studios, many of which did not receive outside funding.


The upcoming arrival of the highly anticipated Half-Life game Alyx is expected to further boost demand for virtual reality. In particular, the announcement of the game caused a scramble for Valve Index headsets that ran out of stock. Valve is not the only company that has fallen victim to the success of its virtual reality headset. Twice in 2019, the Oculus Quest was also found in this situation.