“Recall” is a virtual reality program that allows you to learn and store documents or other archives more efficiently than the old method.

La virtual reality is booming and affects all sectors. Gaming, simulation, video but also education. Indeed, American students use this new technology through clubs, design laboratories or even hackathons.

Last month theUniversity of Southern California’s Virtual Reality Club (VRSC) organized its first annual virtual reality festival, including a presentation of projects and panels with the Walt Disney company as a sponsor. Students came from all over the United States, from California universities in San Diego and UCLA in Colorado and Marymount, to participate in the celebration. The judges were professionals from the tech industry (companies such as NVIDIA or Google). $ 25.000 in prizes were to be shared between the winners of 4 categories: “360 Live action video”, “360 Animation”, “Interactive VR Games and Immersive Technology” and “Augmented Reality”. VRSC President Lindsay Townley said virtual reality is the future, that it is not a saturated environment, because of its novelty. Juniors and Seniors would be on an equal footing in the face of this technology. 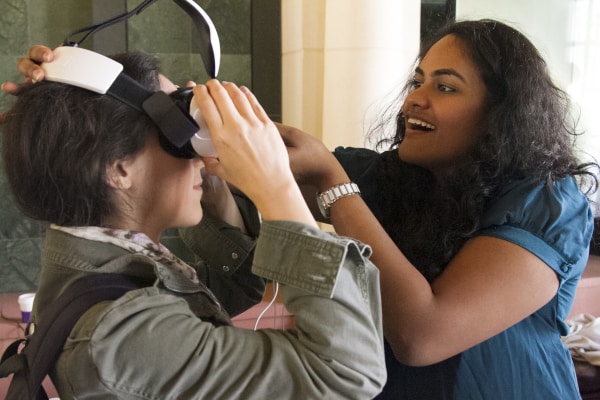 One of the projects of a team, soberly named “Recall”(Reminder) was created to help help its users memorize information faster by associating terms or information with locations. Two students from the‘University of Southern California (USC) are behind it. Lucas Ferrer and Jyotsna Kadimi created Recall with the help of engineering and design students. Its operation is simple and efficient: the user will download a document in the Recall program. This document will be scattered in virtual rooms of bright colors. The user will then be able to move through these rooms to process the information in an unexpected way, search for the desired information according to the rooms and store his documents by arranging them in various categories.


Recall draws inspiration from a psychological theory on withholding of information. Since each part of the document appears in a unique and colorful location, the user can more easily remember information by associating it with the virtual location in which they found it.

Another major fact, the University of Houston (Texas) created a virtual clinic and research laboratory in 2002 with the aim of treating addictions and mental disorders. They continue to develop the virtual reality through experiments to treat anxiety and drug addiction.

Despite this, Townley also cautioned against too loose an expansion of VR:

Virtual reality and new technologies are undeniably part of the future of education but also tend to improve the areas of learning and health.

RoVR: the first VR pet to heal like a Tamagotchi ❯

add a comment of American students revolutionize learning with Recall