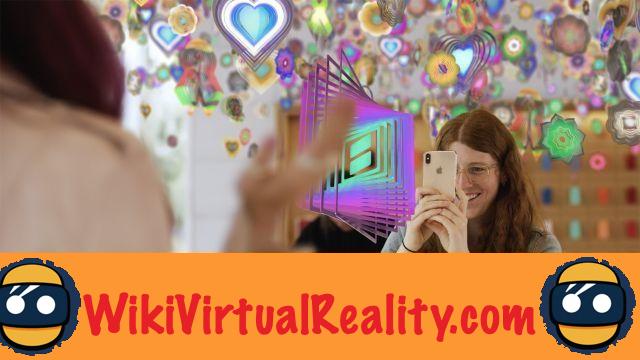 After virtual reality art, augmented reality as a new fashionable artistic medium? Apple announces a new addition to the “Today at Apple” sessions held in its Apple Stores around the world. From now on, visitors will be able to embark on an interactive route to discover works of art in augmented reality made by the greatest digital artists.

From August 2019, in all Apple stores, customers will be able to use the new ”[AR] T Viewer” available on the Apple Store app to interact with an AR work of art titled ”Amass” by Nick Cave. This work proposes "to experience a universe of positive energy in the middle of an Apple Store".

Other exhibitions and interactive tours will be offered exclusively in a selection of Apple Stores: Fifth Avenue in New York, Union Square in San Francisco, Coven Garden in London, and Marché Saint-Germain in Paris. Augmented reality requires, the virtual works presented in these shops will be integrated into local landscapes. The opportunity to rediscover the chic district of Paris from a new angle ...

Apple Store: learn how to create your works of art in AR with Swift Playgrounds

At the same time, Apple Store customers will also be able to join sessions to learn how to use Swift Playgrounds to create their own augmented reality experiences. During 90 minutes, participants will be guided through their first AR work based on creations by New York artist Sarah Rothberg.

Apple's new director of retail, Deirdre O'Brien, hopes customers will be inspired by the new initiative. The objective of these new Today at Apple sessions is to open ”a window on the creative and artistic possibilities offered by the products“ from the firm.


Remember that Apple is actively developing its augmented reality framework ARKit, version 3.0 of which will be released with iOS 13, allowing developers to create AR applications for iPhone and iPad. This is therefore a wise strategy on the part of the Californian apple, aiming to introduce this new technology to as many people as possible.


These new sessions will start from August 10, 2019, and participation will be completely free. If you are interested, register online at this address.