With the imminent launch of the Oculus Quest, virtual reality is about to enter a new era. From now on, there won't be no need for a PC or external tracking sensors to immerse yourself in the virtual world. You just have to put on your helmet to get away from the real world with ease.

It is a big step forward compared to the first helmets of 2016 like the Oculus Rift or the HTC Vive, but these devices are still far from perfect. The quality of the display leaves much to be desired, and autonomy is a big weak point since this type of headset works on battery.

ARM Mali-D77: a graphics chip to improve the performance and efficiency of stand-alone VR headsets 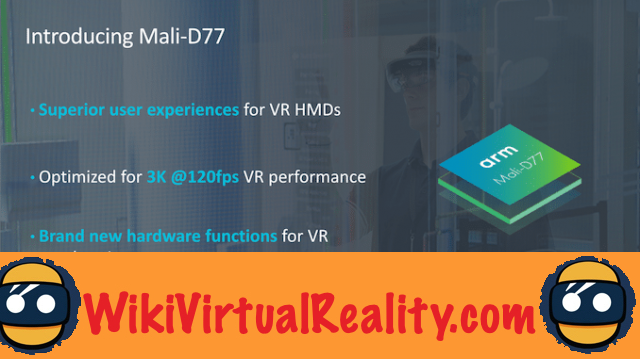 To remedy these problems, ARM today unveils a new graphics chip design: the Mali-D77. This new architecture, designed for autonomous VR headsets, will make it possible to remove visual artifacts and improve performance. Phenomena such as image distortion and chromatic aberrations can be corrected.

In addition, by re-projecting the images in order to adjust them to the position of the helmet, this chip will reduce the risk of ”Motion Sickness“. The Mali-D77 will also improve the autonomy of autonomous VR headsets with energy consumption reduced by 12%. Bandwidth consumption will be reduced by 40%.

Note that this design is optimized for VR headsets offering 3K definition for 120 frames per second. Therefore, future helmets with higher performance will not be able to take full advantage of it. However, ARM is convinced that this chip will allow the creation of helmets that are lighter, smaller and therefore more comfortable.


For now, it is only an architecture. The various chip manufacturers will have to implement this design in their processors, which will then have to equip virtual reality headsets. It will therefore probably be a few months, or even a few years, for the first stand-alone VR headsets equipped with Mali-D77 graphics chips to be available on the market ...