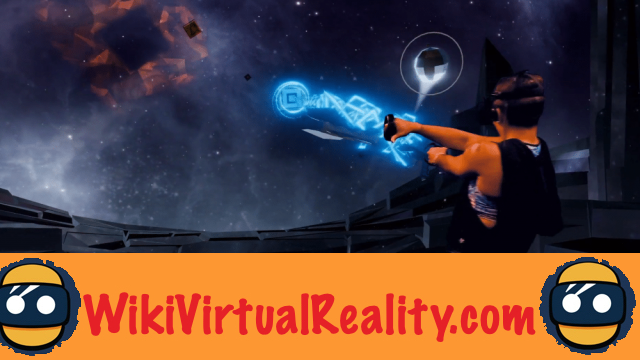 Until the end of the 2000s, Harmonix reigned supreme in the rhythm games market with its cult franchises Guitar Hero and Rock Band. Unfortunately, fashion has more or less faded thereafter.

With the arrival of virtual reality headsets, Harmonix tried to take a second breath. The studio launched Harmonix Music VR on PSVR in 2016, Rock Band VR on Oculus Rift in 2017, and the karaoke game SingSpace on Gear VR in 2017.

However, the former king of the rhythm game has had the limelight stolen by independent studio Beat Games and its famous Beat Saber. Unlike the various Harmonix VR games, Beat Saber met with phenomenal success and has established itself as one of the best virtual reality games in all categories.

Decided to take revenge, Harmonix announces today Audica: a "VR rhythm shooter". To put it simply, this new game is quite simply like a Beat Saber with guns. Rather than slicing the scrolling notes with sabers, the player uses guns.

Audica: towards a success comparable to Beat Saber?

As we can see in the trailer, the player will be able to perform different types of shots depending on the targets to be shot down. It will even be possible to destroy some targets with a good old shot of the family butt.

The soundtrack will be mainly composed of famous songs that Harmonix bought the rights, but will also group tracks created by the studio. Most of it will be electronic music, but the developer also plans to adapt to player demand with DLCs of different musical genres.

The studio also announces that Expert mode will be a real challenge for the most talented players. However, four difficulty modes will be offered and everyone will be able to navigate. It is not yet known whether it will be possible to create mods and songs, which is one of the great strengths of Beat Saber.

The game will be available in Early Access from March 7, 2019 on Oculus Rift and Steam VR (HTC Vive, Windows Mixed Reality…). There will only be about ten songs on offer, but the studio is targeting around 25 songs for the final version expected by the end of 2019. It is difficult to predict whether Audica will meet the same success as Beat Saber, but the concept and the trailer are in any case very promising ...

A suite of apps to beautify your selfies and correct flaws ❯

add a comment of Audica: a Beat Saber with guns by the creator of Rock Band