BigScreen to offer 3D VR projections of the movie Titanic 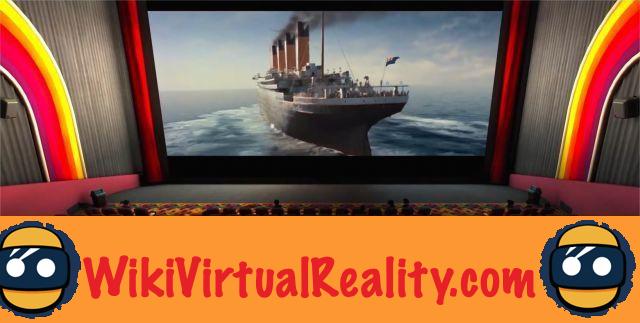 Titanic, James Cameron's classic, hit BigScreen screens on Valentine's Day in North America. It will be released in other countries soon.

Released in 1997, the film quickly became a record-breaking phenomenon in theaters, garnering 11 Oscars and numerous awards. The love story, and especially the sinking of the famous liner, upset millions of spectators. In 2012, on the occasion of the centenary of the terrible shipwreck, a 3D version of the film was produced, giving particular relief to certain particularly impressive scenes from the feature film. The application that offers you a virtual reality movie theater, BigScreen, has added this great classic to its mailing list.

See or re-watch Titanic in 3D with BigScreen

Whether it is the romanticism of the love story between Rose and Jack, the impressive scenes of the shipwreck or even the scene of the unfortunate man who falls and smashes against the immense propeller blades of the liner, we all have a good reason to see or see Titanic again and what's more in 3D. During the week of Valentine's Day, BigScreen presented the great classic in its virtual reality rooms. Unfortunately, only in North America at the moment. The application has also published a funny video for this event.

The platform that offers to watch movies as if you were in a movie theater using a virtual reality headset, however, ensures that it is working to offer more films around the world. A little patience is therefore necessary to see Titanic in 3D from your living room.. Note, however, that this is the full 195 minute version. If you're using an Oculus Quest, make sure it's loaded before you jump into the screening of this classic.