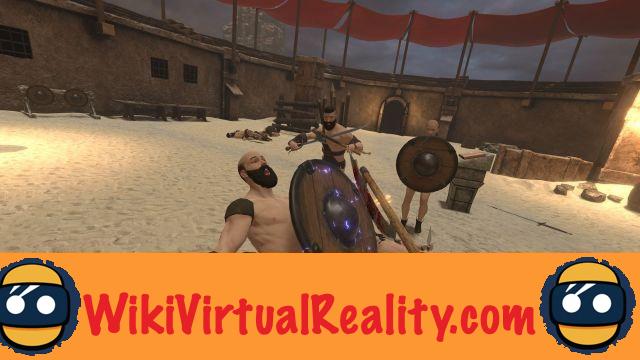 There are already many virtual reality video games offering knife fighting: Bethesda, or the gladiatorial fighting game. Sadly, all these games are sorely lacking in realism.

Instead of a heavy sword, it feels like holding a rubber door rod or a balloon. In addition, the impact is the same regardless of the power and amplitude of the blow: you can cut a tree trunk by touching it in slow motion without gaining momentum. Necessarily, the feeling of immersion is considerably reduced.

With its game, however, independent developer WarpFrog plans to address this major VR problem. In this game, knife fights are all about realism. Objects have a weight subject to the weights of physics, just like the bodies of creatures.

Collisions are governed by very thin “hitboxes” (collision masks) to avoid coarse impacts. In addition, swords are able to penetrate the softest materials and even deflect projectiles. At launch, eight bladed weapons will be available: swords, daggers, shields, axes, spears and bow.

Blade & Sorcery: knife fights governed by the laws of physics

Even if the fights are realistic, the game also gives pride of place to fantasy. So the players will also be able to fight using magic. Three spells will be offered at the release of the title: time slowing, lightning and telekinesis. It will also be possible to move around freely, jump, run and kick.

Three different maps will be offered: house, arena and ruins. The enemy archetypes will also be three in number with fighters, rangers and mages. It will be possible to customize your avatar, and even to mod the game in all directions. However, the game will first be launched in Early Access and there will be no specific storyline or goals to achieve first.

Either way, the realistic stabbing fights should thrill many VR fans. We however regret the absence of a multiplayer mode. It will therefore only be possible to face characters controlled by the computer.

Blade and Sorcery will be available in Early Access on Steam during the month of December 2018. It will be compatible with Oculus Rift, HTC Vive and Windows Mixed Reality VR headsets. Subsequently, the developer plans to add more maps, new weapons and allow modders to create game modes. Depending on the success of the game, early access will last between six months and two years.

VR headset sales collapse, but not for long ❯