Calm Down, Stalin: a hilarious game in the shoes of the Communist dictator 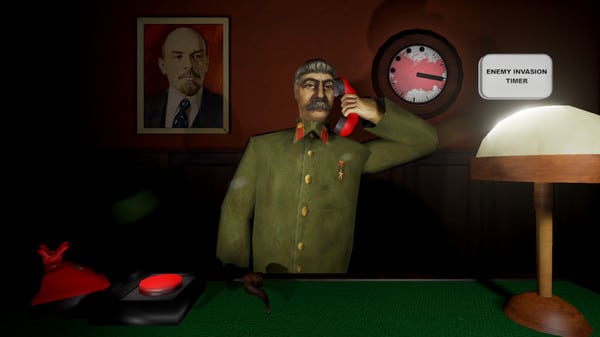 Calm Down, Stalin is a wacky and surprising first person virtual reality game in which you will play as Joseph Stalin, the famous Communist dictator.

Who never dreams of being an authoritarian dictator? To have this feeling of absolute power, to generate fear in others and to have a cult of one's image. Joseph Stalin alone represents this absolute power. The mustache of Georgian origin, in fact, led the Union of Soviet Socialist Republics (USSR) with an iron fist until 1953. In the middle of the Cold War, and while the USSR was a nuclear power, the The man in power in the Kremlin is believed to be responsible for the deaths of 3 to 20 million people. This virtual reality game invites you to step into the shoes of the amateur blowjob dictator.

Calm Down, Stalin: a rather wacky virtual reality game

In Calm Down, Stalin, you play as the famous dictator who put the then USSR under his yoke. This game, based on a first person view in which you will control, with your hands, the activities of Stalin in his office. Worship of the image requires, you can observe your reflection with the famous mustache in a mirror.

Different tasks are available to you. Answer the phone, sign decrees, and eliminate rivals. A revolver on the desk will be useful for this. You can also, at your leisure, smoke a pipe and hit the objects present. Be careful though, in Calm Down, Stalin, the red button that will launch a nuclear attack against the great American rival is at hand ... and it should not be rushed!

add a comment of Calm Down, Stalin: a hilarious game in the shoes of the Communist dictator