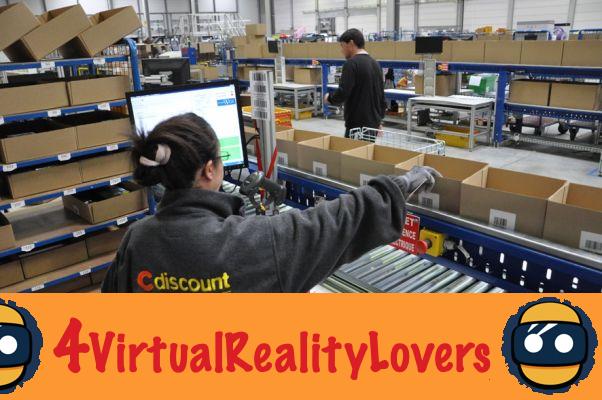 Since 2012, the Parisian start-up has been providing its augmented reality technology to the Cdiscount e-commerce site. Integrated into the mobile application of the e-commerce site, this technology allows users to visualize products through 3D renderings and insert them into their real environment via the smartphone camera. For example, it is possible to visualize how a microwave oven would fit in a kitchen, or if a television would fit on the living room cabinet.

Initially, only a few products from the Cdiscount catalog could be viewed in augmented reality. Over the years, the number of compatible products has multiplied. Today, more than 5000 Cdiscount articles can be viewed in AR. And for Cdiscount, this option is extremely beneficial.

According to the results of a series of A / B Testing conducted by Augment, when Cidscount customers activate the augmented reality visualization option, the conversion rate increases from 20 to 80% depending on the product. Suffice to say that augmented reality really makes it possible to encourage purchasing.

The increase in sales is particularly pronounced in the category of large household appliances. Augmented reality, on the other hand, is less effective for small appliances and electronic devices such as tablets or speakers.

It is hardly surprising. Indeed, traditionally, one of the main weaknesses of e-commerce is the impossibility of preview in a concrete way the dimensions of a piece of furniture. This can be very problematic. To put it simply, no one wants to buy a fridge and take it to the fourth floor only to find that it is too wide 4 centimeters to be installed in the apartment.

La augmented reality solves this problem. This is also what Ikea offers with its augmented reality application Places. On the other hand, it is not really necessary to see what a touch pad looks like before ordering it.

The other great strength of augmented reality is to reduce the amount of product returns. On average, the number of returns decreases by 20% when users of the application use augmented reality with to proceed to purchase. Here again, the phenomenon is particularly advantageous in the case of large items, the return of which is very expensive for Cdiscount.

Another advantage for the French e-commerce site: augmented reality encourages users to spend more time on the mobile application. On average, mobile users who use AR use the app twice as long than the others. According to Augment, this phenomenon is linked to the fact that users take the time to observe the product in 3D from all angles and move it around the accommodation to find the most suitable place. Rather than spending hours window shopping in stores, it is now possible to shop at home.


Indeed, the economic model is based on a subscription paid by brands so that the start-up is responsible for creating the 3D renderings of their products from 2D photos. Once the 3D models have been created, distributors such as Cdiscount just need to insert a few lines of code into the product sheets for the AR visualization option to be offered to customers.

This subscription is billed on average 15 euros per month per product and per distributor offering the product. For brands, this subscription can be profitable since it has a strong chance of increasing product sales. Currently, Augment has 12 brands among its clients including Electrolux, Microsoft, Moulinex, Nespresso, Panasonic and Tefal. In addition, in order to demonstrate the advantages of its technology, the start-up modeled the products of more than 80 brands for free. In total, more than 100 brands and 10000 items are therefore compatible with Augment's AR visualization technology.

add a comment of Cdiscount: augmented reality boosts sales by 80%