CES 2019 AR: top of the best news for augmented reality 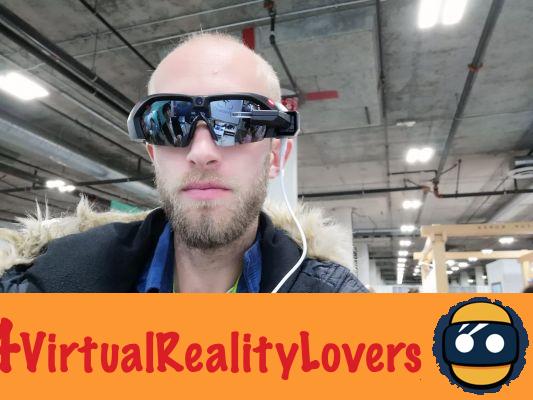 - immersive technologies were at the rendezvous at CES 2019 in Las Vegas. After presenting you with the best innovations for virtual reality, it's time to review the best exhibitors in the field of augmented reality.

RealMax Quian, the widest field of view in the AR headset market

After having surprised everyone at CES 2018 with its AR headset offering a field of view of more than 100 degrees, RealMax was back at CES 2019. The Chinese firm came to present its new RealMax Qian headset, originally announced in December 2018. This time it is a product that is ready to market.

This all-in-one headset includes a Snapdragon 835 processor, battery and sensors. Thanks to his 100,8 degree field of view, AR content clipping only occurs at the ends of the frame. In addition, thanks to the nine-axis IMU sensor, the device offers six degrees of freedom of movement.

On the RealMax booth at CES 2019, the demonstration allowed move around the real world to fire on virtual flying fish. By default, the headset does not support gesture controls and requires the use of a controller. However, it is possible to connect a Leap Motion sensor via USB to interact with your hands directly.

For the moment, the release date of Quian has not been communicated. On the other hand, the manufacturer plans to market its device for a price of around 1000 dollars. It could be a serious competitor for the Magic Leap One and the Microsoft HoloLens. 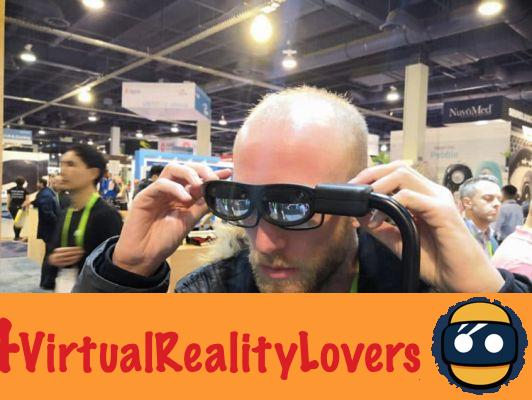 The Chinese company Nreal was also present at CES to unveil its augmented reality glasses. This product stands out mainly for its design: they are significantly smaller and lighter than other models available on the market today. Their weight is only 85 grams.

To achieve such a Form Factor, the company placed the electronic components and the power source in a separate pack connected by a cable that can be slipped into your pocket. The motion controller on the other hand is a small disk that can be magnetically attached to the processor pack and communicates wirelessly. You need to connect your smartphone to the box via a USB-C cable to power the assembly. Note that only Samsung smartphones are currently compatible.

Each of the two lenses of these glasses displays a 1080p definition image with a total field of view of 52 °. The device draws its power from a Snapdragon 845 processor, and offers 360-degree spatialized sound thanks to two integrated speakers as well as a microphone for voice control. The sensors offer six degrees of freedom of movement, but the controller is limited to 3DoF.

Two cameras on the front make it possible to map the real environment and to follow objects which move within it. These glasses are expected for the third quarter 2019 for a price of just under $ 1000.

Thanks to augmented reality, Cupixel offers everyone to learn to draw. To do this, you just need to film a small square of cardboard with your tablet. On the screen, a drawing appears on the cardboard. Since then, the user only has to re-iron the line using his pencil. This allows him to reproduce the design accurately in just a few seconds.

The second step is to color the drawing, always following the model that appears on the screen. It is then possible to assemble the different boxes to reconstitute the drawing as a whole. Thus, you will not only be able to learn little by little to draw on your own, but also to create very pretty works to decorate your walls. A simple idea, but particularly interesting and well thought out.

Holoforge Interactive, the augmented reality and professional applications division of Bordeaux video game studio Asobo Studio, was present at CES to present its platform designed for Microsoft's HoloLens headset of which it is one of the official partners.

On its stand, the firm has chosen to present a rather fun and universal application of its platform: furniture assembly kit. As you probably know, this operation can often prove tedious even when trying to follow the instructions to the letter.

By donning the HoloLens, the user can view indications that are superimposed in real time on the elements of the real world to help him assemble the cabinet. For example, the HoloForge platform tells him what parts he needs when looking at the box, and how to put them together. In addition, in case of difficulty, it is possible to call on a worker to benefit from remote assistance thanks to the on-board camera. Enough to make life easier for many consumers ...

However, this is far from the only use case of this platform. Holoforge, for example, provides its platform to Areva to enable employees to benefit from video assistance during maintenance operations in nuclear reactor vessels. Likewise, the Naval Group uses it for the work of boilermakers in a remote environment, and the pharmaceutical manufacturer UPSA in Agen uses a machine training tool for its new employees.

With the CNRS, Holoforge has forged a partnership around archeology and museography. Holograms are superimposed on a copy of Akhenaten's bust, allowing museum visitors to see textual information and other graphic elements appearing while contemplating the sculpture. You will understand that the use cases of HoloForge are very numerous. In reality, users can create their own apps or call on the company to do it for them.

We particularly enjoyed the AstroReality booth, although it was more of a good idea than a breakthrough technology. Intended for schools, the Solar System Ultimate set includes 3D printed polyresin miniature models of the ten planets and eight moons that make up our solar system. Each model is molded and painted by hand.

Using a smartphone, it is possible to scan these different stars to obtain detailed information about them. The user will learn, for example, what the planet is made of, or compare its past state and its present state. The information is drawn directly from studies by NASA and other space agencies and updated in real time as new discoveries arise.

In the USA, the Solar System Ultimate set is offered for $ 499. It is not officially available in Europe yet, but the company explained to us that several French teachers have ordered it on a personal basis for use in the classroom.

Pico Air Light, a lamp that projects a Tower Defense game on the table

We end this top with a particularly atypical product. To be exact, this is only a prototype. Along with its G2 4K VR headset, the Chinese Pico presented a concept called "Air Light". This lamp is capable of detect different miniatures to project a Tower Defense type game on a flat surface. The user freely disposes of his castle and the portal from which the monsters appear, and connects them by a road. He then places the various units responsible for slaughtering the monsters before he arrives at the castle.

Once the pieces have been placed, the lamp shows the various elements such as the path, the firing radius of the different defense units, the monsters and the castle's hit points. If you are a fan of Tower Defense, this prototype probably makes you want as much as we do. However, for now, the launch date is not yet scheduled since it is a project under development...

Oculus Quest: the 1st VR headset that never tires of gamers according to Zuckerberg ❯

add a comment of CES 2019 AR: top of the best news for augmented reality