Children and VR - The dangers of virtual reality for the youngest 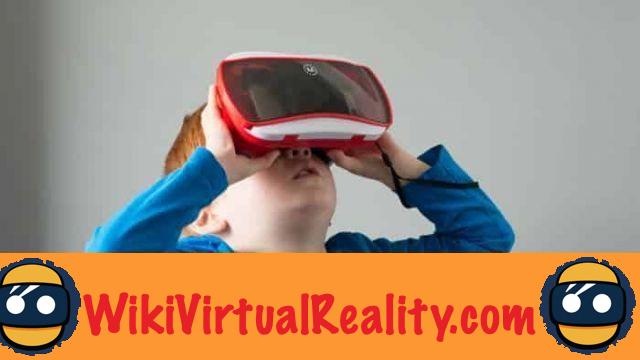 Oculus Rift, Samsung Gear, and HTC Vive VR headsets are prohibited for children under 13. For the Playstation VR, the age limit is 12 years. So, are these measures taken rightly?

The answer would be yes, because as a new tool, we do not have sufficient perspective to realize the consequences of the device. It is a protection put in place by the manufacturers to avoid any worries following the sale of the product.. An action that is now commonplace and understandable. Now let's try to find out what VR can mean for children. 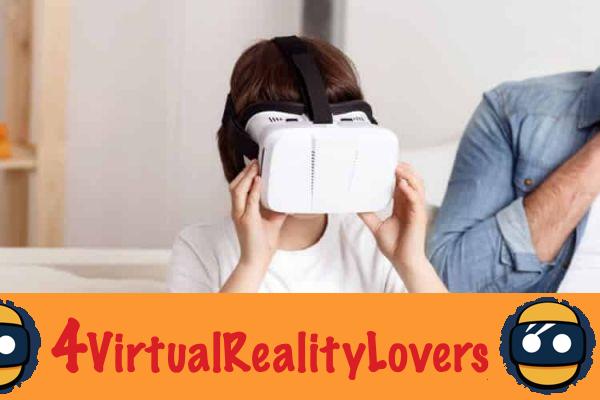 Un new report just published in April 2018 by researcher Jeremy Bailenson of the Virtual Human Interaction Lab at Stanford, in partnership with Common Sense Media. This report highlights the potential dangers and everything parents need to know about virtual reality for their children. Common Sense Media, whose website lets parents find out whether a movie or book is suitable for their children, is also announcing its intention to start evaluating VR video games.

As much to say at the outset, the conclusion of the report is that we ultimately know little about the effects of VR on children and their brains developing over the long term. VR is still too recent to be able to draw any conclusions with any certainty. Caution and moderation are therefore required. 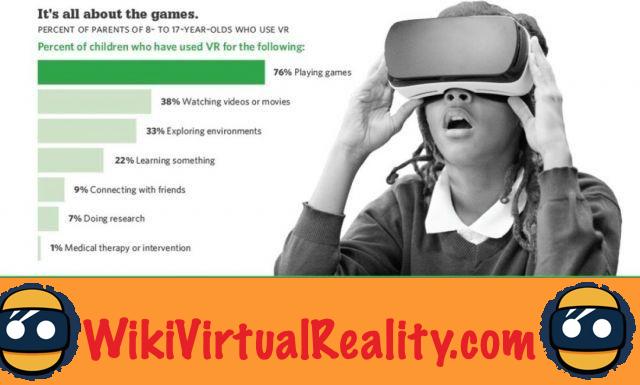 The researchers believe that virtual reality is likely to have powerful effects on children, as children can react to VR the same as they do to real-world experiences. So, before choosing a VR game for their kids, parents should consider whether their kids would like to experience it in the real world.

For example, being attacked by a horde of zombies is not necessarily a very positive experience for the developing child. Always in this sense, virtual reality characters could have more influence (good or bad) on children as the characters on television or on computers. 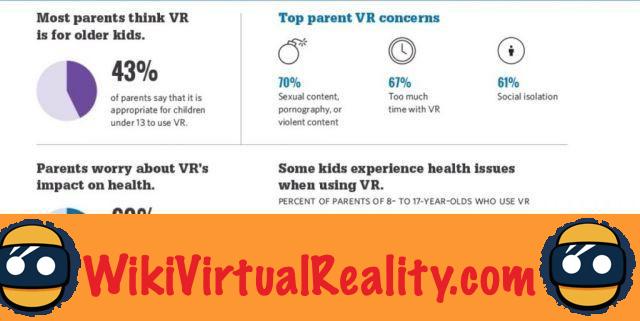 The study also mentions the risk that VR video games can make children violent. While this topic remains controversial, a lot of research over the past 30 years suggests that violent video games can stimulate aggressive behavior. If so, the effects could be further accentuated in the case of VR games.

Regarding the age limits recommended by the various manufacturers of VR headsets, the report recalls that these estimates do not result from clinical analyzes. Thus, more than 7 in 10 parents believe that virtual reality is appropriate for children under 13 years old. The important thing is that children are able to distinguish the real from the fictitious. This distinction is generally made from 5 to 7 years old. 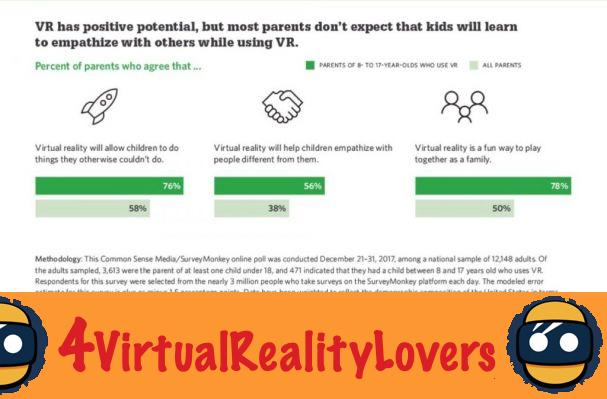 Among the positives, the report states that students are generally enthusiastic about learning using virtual reality. However, they do not necessarily learn more from virtual reality than from more traditional media.


In addition, virtual reality can be effective in stimulating empathy between children. Parents interviewed for the study, however, are skeptical of this belief.

To summarize the Common Sense Media report, the full version of which is available for free on the organization's official website, the dangers of VR for children remain unknown for the time being. This technology can have a strong influence on young people, especially if they do not yet distinguish the real from the fictitious. It is therefore best to avoid violent or negative experiences.

Different from a book or a smartphone?

For young people, using a smartphone or a book can be problematic after heavy use. There is only one reason for that: The need to focus your gaze on a specific point close to the eye. According to an American study, the percentage of people with myopia between 12 and 54 years old rose from 25% in 1971 to 41,6% in 1999. The growing use of computers, books and smartphones is said to be the main reason.

So it's no wonder that the use of helmets with a screen attached a few centimeters from the eye is scary for many people. Yet it is not, according to Martin Banks of the University of California specializing in eye science, it is totally different: 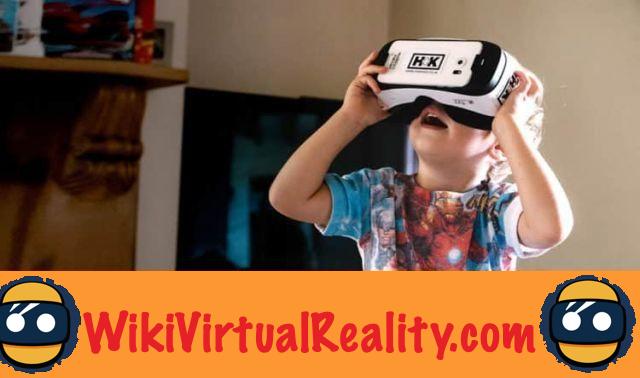 In short, it becomes impossible to compare the use of a computer screen, a smartphone or a book to the use of a virtual reality headset, which is not, however, a sufficient reason for announce that helmets are not dangerous for children's eyes, explains Gilles Renard, scientific director of the French Ophthalmology Society.


Last point to note and which would contradict Renard's words, it would be possible that virtual reality headsets can be used more to spot vision problems than to cause them. The device used by the helmets reproduces the current system of functioning of the eye by displaying an image on each side in order to manage the depth.  Thus it would be possible to identify a dysfunction in a child earlier thanks to helmets.

Common concerns between children and adults

Sight specialist Professor Peter Howarth explains, The main other concern could not be more concrete: Bumping into the environment around you. A problem shared by people of all ages but which could be more important for children, more carefree. explains Dr. Cyriel Diels, expert in psychology and human behavior. An interesting idea that Oculus CEO Brendan Iribe explains in an interview with VRFocus in 2015:  » 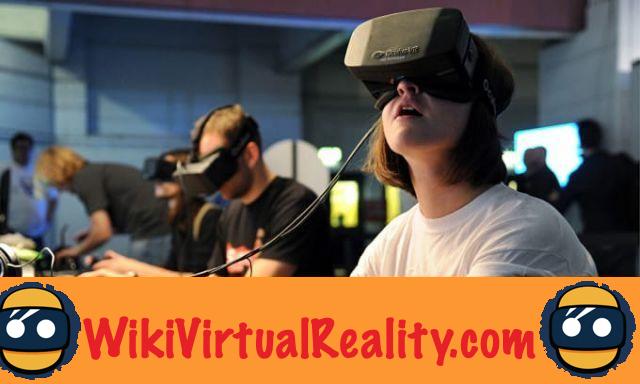 Now let's talk about the instructional possibilities offered by virtual reality. It becomes possible to discover other places, other times, without leaving home. An attractive method to convince children of the interest of certain school subjects such as History-Geography, such as Edo VR, which offer to rediscover Tokyo in feudal times. But this does not stop only in these subjects, physics-chemistry, sciences and mathematics could also draw an interest. By displaying certain information in 3D they can become more readable and understandable for the user. Like Big Data, which is given a new lease of life thanks to virtual reality and the display of graphic data in a 3D space.

We can also mention the distance courses that some children take. Thanks to virtual reality it will be possible to make them take this type of course but with more immersion which can help concentration and exchange. 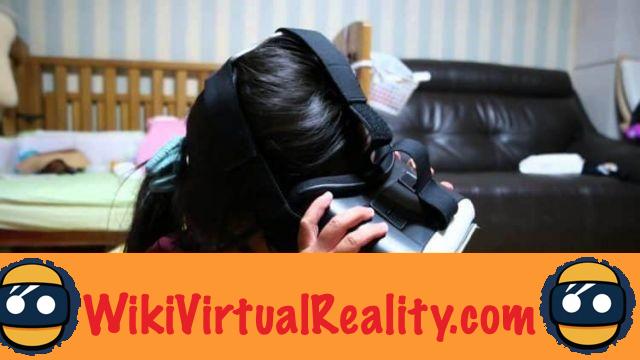 The risks of virtual reality for children are not yet fully determined. The risk of myopia possibly exists but only time will be able to answer this question. Hopefully, manufacturers will develop helmets suitable for children in the near future. Let's end with a quote from Professor Banks: