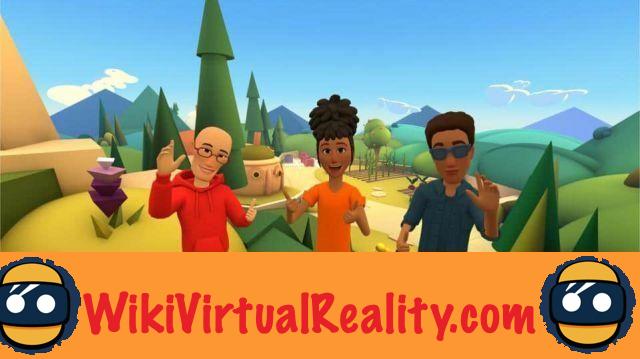 For the second time in a year, we are currently confined to our homes due to the COVID-19 pandemic. For many of us, the need for social contact arises and loneliness becomes heavy…

If you are in this case, know that virtual reality can allow you to find a balance. It exists many so-called “Social VR” applications, whose primary goal is to socialize with other users in virtual environments.

Even if nothing beats a good night out with friends or a happy meeting in the real world, these apps undoubtedly constitute the best alternative today. The gestures and facial expressions of the avatars, combined with the voices of the users, make it possible to quench our natural thirst for human interactions ...

While waiting for deconfinement, virtual reality can therefore be very beneficial for your mental health. Find out which are the best Social VR apps, depending on what you're looking for.

With millions of users, VRChat is considered by many to be the benchmark for Social VR applications. It is in any case one of the oldest, since it has been available since 2014 on the first Oculus Rift DK1.

In this virtual universe, you can play absolutely any character thanks to the Unity-based avatar creation system. It is also possible to create your own environments.

The atmosphere is relaxed, and the confrontations between very different avatars give rise to hilarious situations. Great moments of laughter guaranteed.

This application also owes its success to the fact that non-VR version is available on PC. VR and PC users can therefore coexist freely.

BigScreen, to watch videos with strangers

If you particularly like to pose in front of a movie or a video, BigScreen is the application for you. It offers you to sit in front of a giant screen with strangers or with your friends, in the form of avatars, and to watch any video.

Any video that you can access from a computer can be streamed live on the giant virtual screen of this VR world. The opportunity to feel you a little less alone while you "bing" the latest Netflix series.

Now it is also possible to pay to watch VoD movies. A lobby also makes it possible to meet new people and discuss.

Rec Room, to socialize while having fun

In Rec Room, as on other Social VR platforms, it is possible to discuss and meet people with complete peace of mind. You can walk around the ”Rec Center” where you can meet other players and interact with different objects such as a basketball or a Frisbee.

It is also possible to bask the pill in the park, or to warm up near the campfire. You can even get together with your friends in a private room created to measure.


However, this application is also for to those who love multiplayer games for their user-friendly aspect. Many mini-games are available.

Delivery charges Cooperative “quests” are offered, just like a Battle Royale type shooter or a laser game. You can play paintball, prison ball, charades… content is added very regularly. So you will be able to meet users of all the different VR headsets, while having fun.

If you are tired of the wacky avatars of VRChat, or the cartoonish characters of Rec Room, and you are looking for a certain realism, vTime XR is the ideal application. The avatars look like normal human beings, and the rather minimalistic settings are akin to real-world landscapes.

You won't be able to create content or watch videos together on this app, but if you just want to sit in a circle and discuss just like it used to be in real life, you will be satisfied. And what a pleasure to be able to converse without a mask!

This app works like a social network. You can add other users to your friends list and send them invitations to chat. Then just choose the place and find yourself sitting around a round table.

Mozilla Hubs is the easiest and fastest way to access Social VR. It is not an application, but an experience based on ”WebXR“, the API allowing to create VR / AR experiences directly accessible via web browser.

With just one click, you can create a virtual space that anyone can join from a web browser on a VR headset or even on smartphone and PC. Access to this space is secured with a simple code, and invitations can be sent to your friends.

NeosVR is not only an app, but also an operating system and a video game engine. This platform aims to become a real “metaverse”, a virtual parallel universe worthy of the novel “Ready Player One”.

Its handling is rather technical, and may put off neophytes. However, this tool allows you to let your imagination run wild and create whatever you want without any real limit.

The application even has its own cryptocurrency. However, the user base is still rather limited and we will have to wait a little longer for it to develop ...