Cybershoes: the shoes for walking in VR without a treadmill 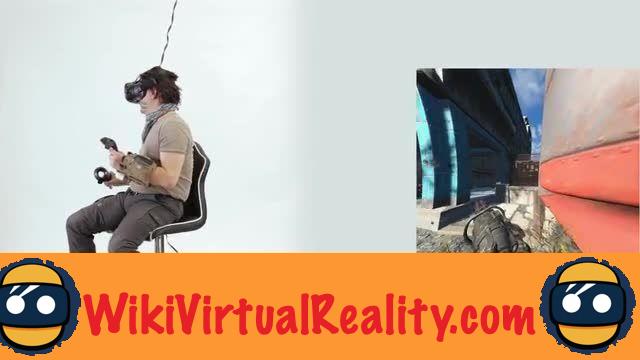 - travel in virtual reality are still a real problem today. Joystick movements, like in classic video games, can quickly cause nausea in many users due to ”Motion Sickness“. As an alternative, many developers opt for teleport travel. However, this alternative turns out to be much less immersive.

One solution is that of “VR treadmills”, or VR treadmills in English: treadmills allowing the user to walk naturally in the real world and in virtual reality simultaneously. The feeling of nausea is eliminated, and the immersion is only reinforced. However, these devices are expensive, bulky, and not always functional.

Today, a Viennese startup offers a relevant alternative: Cybershoes. These are plastic shoes with a wheel under the sole. When the user walks in place, the wheel turns, and the movements are transcribed in the VR. Technically, only forward and backward movements are transcribed. However, if the user turns their head in one direction and walks forward, they will go in the direction of their gaze.

The Cybershoes are connected by means of a USB radio receiver to be connected to the PC. The shoes are recharged in 3 hours via micro USB, and the firm promises an autonomy of between eight and ten hours. All games allowing “free movement” are compatible. This is the case with Skyrim VR, Fallout 4 VR, Arizona Sunshine, and many more.

A Kickstarter campaign has just been launched to finance the project, and has met with tremendous success. In just two hours, the target of 30000 euros was reached. As we write these lines, more than 10000 dollars were raised… And the campaign ends in 29 days! The shoes are offered to contributors for 193 euros. The Super Early Bird option allows them to be purchased for 151 euros. Deliveries are scheduled for January 2019.

Apple: augmented reality glasses in 2020 according to a reliable source ❯

add a comment of Cybershoes: the shoes for walking in VR without a treadmill