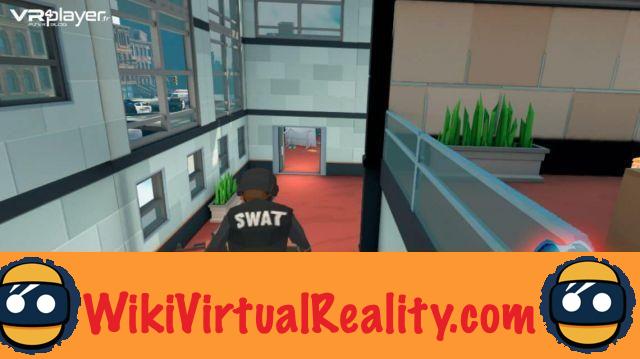 Crisis VRigade is the most popular game on the SideQuest download platform. Despite this, the Oculus Quest Store has refused, for the second time, the game to be added to the official store.

Oculus seems very demanding on the choice of games and applications that can enter the official store of the Oculus Quest. The developers of the most popular game on the side platform of the Oculus standalone headset still do not understand the reasons for the second refusal from the Facebook subsidiary. Some reasons can be advanced but do not seem convincing. Explanations ...

Crisis VRigade is a first person shooter action game. You play as a member of a police intervention company who faces a hostage situation and heavy gunfire during a bank robbery. Although a bit light in terms of content, the game is of very good quality and neat. After a first refusal, the developers of the Sumalab studio offered their game in a free version on the SideQuest platform. The game quickly liked and found its audience.

However, despite more than 72.000 downloads on the SideQuest platform, the studio has just received a second refusal from the Oculus Store. In a letter, the Store simply explains: "". Without giving any real reasons, the email suggests submitting the game to Oculus Start, a program to support independent VR developers.

A refusal of Oculus without clear explanations

Asked by our colleagues from the specialized newspaper, “Upload VR”, one of the developers of Crisis VRigade expressed his astonishment. He put forward a few reasons: “  ". The developer also speculated on another reason: "". The developers see no other reasons for this refusal.


A refusal that leaves the studio behind Crisis VRigade dubious because, unlike Sony for the PlayStation VR, Oculus does not provide any indication of what did not go well and could use improvement. Facebook has indeed, from the start, been very strict on the quality of the games expected for the Oculus Quest. Many developers have seen their requests rejected by the official Oculus Quest platform forcing them to publish their application on SideQuest, a parallel platform that offers significantly less visibility than the official Oculus Quest store. Other titles that have been very successful on other virtual reality headsets also had to fight hard for months before being allowed on the official store.

Hololens: Microsoft celebrates the first anniversary of its AR glasses and communicates on the future ❯