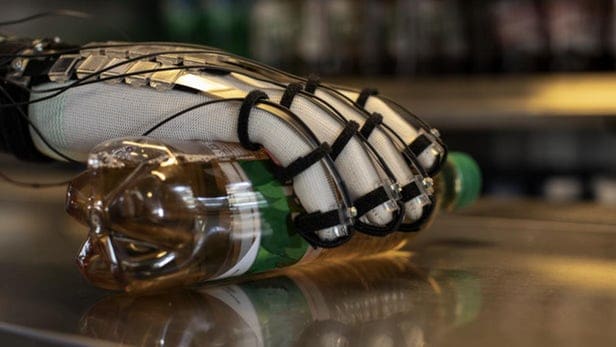 Virtual reality is still in its infancy. A few years from now, we'll be looking at headsets like the Oculus Rift and the HTC Vive with nostalgia. These devices will have become obsolete. The technology that seems cutting-edge today will make young people smile, a bit like when we compare today's computers with the machines of yesteryear.

In that sense, Steven Spielberg's film Ready Player One offers a good glimpse into the future of VR. In the near future, helmets will be wireless, and we will immerse ourselves in the virtual world by wearing combinations and gloves with haptic feedback to stimulate all the senses.

Moreover, companies like Contact CI and HaptX have already created functional haptic feedback gloves. These accessories are not yet available on the market, but they are already very successful.

Today, however, researchers from the École Polytechnique Fédérale de Lausanne (EPFL) and the Eidgenössische Technische Hochschule (ETH) in Zurich unveil a prototype glove with haptic feedback that has enough to forget the other models even before their commercial launch. The proof that we are not lying to you when we say that the future is approaching!

DextrES: a 40 gram haptic VR glove that can work on battery

The ”DextrES” is a haptic VR glove made of a material of only 2 millimeters thick. Its components weigh about 8 grams per finger, for a total of only 40 grams. The accessory is therefore much less imposing than the other solutions unveiled previously.

Another strong point of DextrES is that it requires only 200 V and a few milliWatts to work. So even if the current prototype works with an electric cable, it might be possible to power the accessory with a small battery. Despite its compact dimensions and low power consumption, the DextrES is capable of generating maximum resistance of 40 Newtons to each finger.


To be able to deliver this resistance, the nylon glove is lined with thin elastic metal bands that cover the top of each must. When the user grabs an object in virtual reality, the device sends a voltage difference between the metal parts. This causes a electrostatic charge having the effect of bonding metal parts between them. Thus, the user has the sensation of holding a real object. When he drops the object, the resistance is canceled and the glove becomes flexible again.

This revolutionary accessory is primarily intended for VR video games, but could also be used in other sectors such as health. For example, surgeons could use it for training.

For the time being, this project is still far from being completed. DextrES is only at the prototype stage, and its possible commercialization is not for tomorrow. However, it is quite possible that this accessory represents the next step for virtual reality and augmented reality. Moreover, the researchers plan to create a complete suit based on the same technology in order to offer haptic feedback for the whole body ...

add a comment of DextrES: the haptic VR glove barely bigger than a normal glove