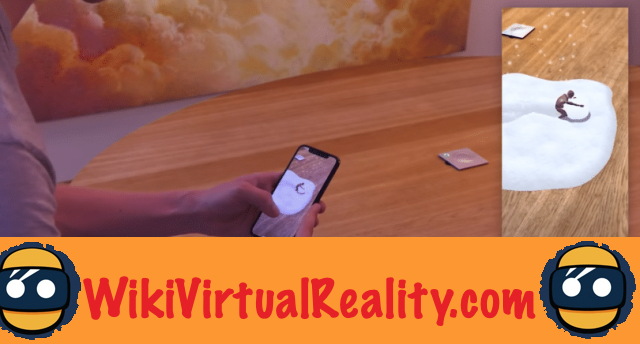 In 2011, researcher Karl Willis of Disney Research invented the “MotionBeam”: a concept allowing users to interact with augmented reality thanks to a digital ray created by a portable projector. Seven years later, a team of Disney Research was inspired by the idea of ​​MotionBeam to create the ”PuppetPhone“.

The concept is simple, but very interesting. It's about using augmented reality to control a virtual character intuitively using a smartphone. Like a puppet, the character comes alive with the smartphone thanks to an invisible link: the ”MotionStick“. If the user moves his smartphone to the left, the puppet moves to the left. If the smartphone moves upwards, the puppet jumps or floats in the air.

That idea is inspired by the way children use their figurines to act out stories they imagine. Thus, users can easily create scenes using virtual puppets. We start by placing a character in his real environment, then a pressure of the screen is enough to take control thanks to the MotionStick. Afterwards, it is possible to make the puppet walk, crawl, run, or jump. User can even create multiple puppets and control them in turn.

Disney: how the PuppetPhone could make mobile gaming more fun

One can easily use the way in which Disney could exploit this invention, to allow children all over the world to control puppets featuring their favorite cartoon characters. The PuppetPhone would allow them to invent their own stories drawn from the universes of Cinderella, the Lion King and other great classics of the American firm.

However, this concept could also be very interesting for the gaming industry and more specifically the mobile gaming industry. Until now, smartphone games mainly offer touch controls based on virtual joysticks directly inspired by traditional controllers and joypads.

Unfortunately, this type of interface has its limits and many gamers shun mobile gaming for this reason. Developer Blizzard recently paid the price with the icy reception given to its game Diablo Immortal. However, the MotionStick could allow the emergence of a whole new kind of gameplay based on augmented reality.

Players could then control their virtual characters intuitively by moving their smartphones. This system seems particularly suited to platform games, but we can also easily imagine MOBAs or hack'n'slash exploiting this innovation. These kinds of games are already popular on smartphones, but could attract more players thanks to this new way of interacting ...


Of course, for the moment this is only an experimental technology developed by Disney Research. In the near future, however, it is very possible that augmented reality is shaking up the mobile video game industry.

add a comment from Disney: augmented reality puppets, the future of gaming?