Ekto One: robotic boots to stay put while traveling in VR 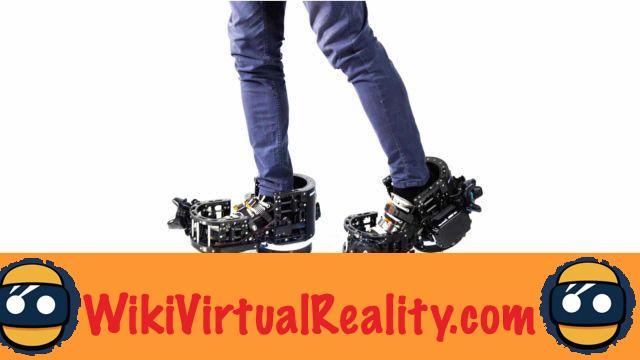 The American start-up Ekto VR could well have solved one of the major problems of virtual reality with its Ekto One boots.

Indeed, this pair of robotic accessories to put on the feet allows the wearer to stay in one place while walking normally. If VR mats can already simulate a stationary movement, here, no need for harness.

To prove it, the company released a video showing someone using the device while playing Half-Life: Alyx. See for yourself :

The boots are carbon fiber, a material light enough not to be disabling in movement. For VR tracking, Ekto has opted for HTC Vive Tracker sensors.

Two pucks positioned at the soles turn according to the direction taken by the player while walking. As soon as it puts a foot on the ground, rollers pull the leg in the opposite direction, preserving the feeling of moving forward while standing still.

Ekto One: safe, but too expensive VR boots

In order to avoid a loss of balance when stationary, brakes are activated when you come to a stop. This last point is important, safety being an essential factor in VR, while we do not see what surrounds us in real life.

But according to Ekto CEO Brad Factor, the company has made rigorous testing on his device. In addition, impossible to run with, for the moment, given the risks involved.

In any case, the concept is more than interesting and could represent the solution of locomotion for the whole VR industry for a more immersive experience. Unfortunately, the Ekto One, in the current version of the boots, will primarily target professional customers composed of companies. It must also be said that they seem rather massive, and too expensive for the average consumer.


That said, Ekto VR envisages for its invention consumer applications within 4 years. Hopefully it comes to fruition.

add a comment of Ekto One: robotic boots to stay put while traveling in VR