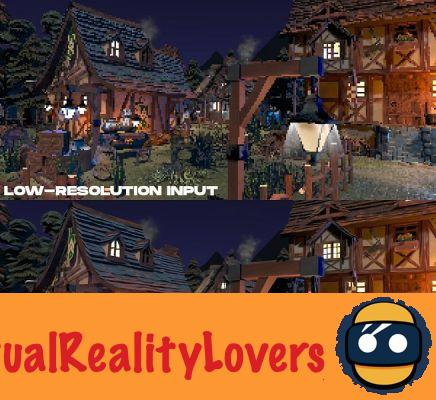 Engineers in Facebook's AR and VR R&D section are working on a system for improve graphics in helmets. The goal is to at least arrive at the same graphic level as that achieved by home consoles. This is what they presented with their article titled “Neural supersampling for real-time rendering” or neural oversampling during real-time rendering.

Facebook had already published an article that dealt with the same subject last March.

The technique used takes advantage of a system that transforms low resolution images to high resolution. Loading these smaller images then frees up computing capacity. This can thus be used to obtain shaders or more detailed effects. The general quality of graphics would therefore be up, even for stand-alone headsets like the Quest.

To do this, Facebook engineers designed an upscaling algorithm managed by artificial intelligence. He multiplies the number of pixels in an image by 16. To fill in this “created matter”, he imagines, thanks to machine learning, what the missing parts could look like. The result is most of the time convincing enough to give the impression that the image has not been modified.

A method more efficient than the others

This technique is not new. Some websites offer to improve the quality of any image. Nvidia has also integrated this technology into its GeForce RTX graphics cards. Since then games should benefit, as was announced for the highly anticipated Cyberpunk 2077. However, Facebook claims their method is more successful. Unlike the others, no visual artifact appears after upscaling, regardless of the ratio used. In addition, it does not require any particular material and will be compatible with all platforms.


Note, however, that all this is not yet that at the research stage. This technique cannot be directly applied to the Oculus Quest in its current state. On the other hand, it makes it possible to highlight areas for improvement from which VR should soon be able to benefit. However, the progress made on image resolution does not only depend on the quality of the screen, as the authors of the article say. There are different ways to give virtual reality games that 'extra' that would make them join their non-VR cousins.

Neurable: a technology for mind control of objects in virtual reality ❯