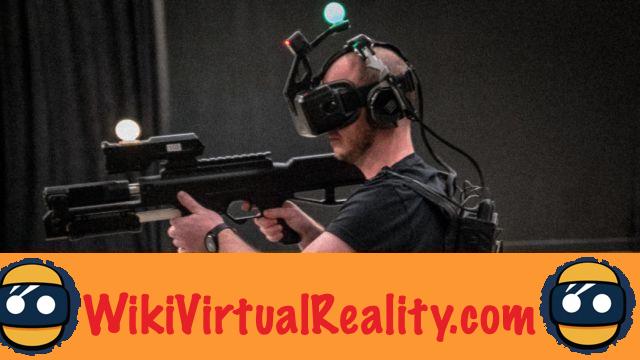 With Fallout 4 VR, Bethesda takes first place in the leaderboard. This title is not only the best VR shooter game, but possibly the best VR game in all categories. Directly adapted from the 4 Fallout 2015 PC / console game, it features all of the original game content ported to VR.

The feeling of being immersed in this vast open world is impressive, and the gameplay has been adapted for virtual reality in a masterful way. The content is colossal, and even the graphics are of high quality even if the definition is lower than that of the PC version. A game to absolutely own.

Stand Out, the best VR FPS in Battle Royale mode

Thanks to PC titles like PUBG and Fortnite, Battle Royale type games are very fashionable in 2018. These games offer a hundred players to kill each other to the last on an island. The last survivor wins the game. Stand Out offers a similar experience, in a VR version.

Players need to stay in cover by crouching in their playing area, peek around, and can even disarm opponents by removing their weapon from their hands. Fans of Battle Royale, here is the benchmark of the genre in virtual reality.

The whistling of bullets. The howls of the soldiers. The tumult of war. Pavlov VR is a virtual reality shooter that play the realism card. Unlike most games that rely on a whimsical aspect and fun gameplay, this title offers a traditional multiplayer shooter experience in the rules of the art.

Available exclusively on PlayStation VR, Farpoint is a first-person shooter that combines impressive graphics, gripping storyline and excellent gameplay. This game produced by Sony also introduced the PSVR Aim Controller. This gun-shaped accessory improves the feeling of immersion in VR.

The game initially offered a single player campaign mode, as well as a co-op mode allowing two players to complete challenges. Subsequently, a player versus player mode has been implemented to allow two players to compete against each other. A must-have for PlayStation VR.

Raw Data is a VR FPS offering dynamic and extremely fun gameplay on HTC Vive. The player control a hacker and fight waves of humanoid robots. Several character classes are available. The enemies are getting stronger, and the goal is to survive as long as possible. A multiplayer mode allows you to ally with a friend to triumph over enemy hordes. A player versus player mode also allows you to compete against other users.

Developed by Epic Games exclusively for Oculus Rift, Robot Recall is an excellent action game placing the player facing hordes of robots that he must eliminate with his bare hands or with the help of a vast arsenal. The title takes full advantage of Oculus Touch controllers and shows the full potential of VR.

Drop Dead est hands down the best FPS available on Samsung Gear VR right now. The player has a vast arsenal to decimate crowds of hungry zombies. The world is huge and the experience very immersive. It is possible to play with a controller, or using the Gear VR's touchpad.

Onward, the most competitive VR FPS

Onward is a very different VR FPS from other titles in the genre available today. Entirely designed for PVP (player versus player) battles, this game looks like a relatively realistic military simulation. The gameplay is rather slow at times, and very intense at times. Players need to coordinate and have a team strategy in place before shootouts. Voice chat allows you to communicate effectively, and gives Onward a social dimension.

Superhot VR, the FPS VR the plus original

Superhot is an original VR FPS, in which user must plan his movements in advance to take down hordes of enemies. The experience is entirely designed for the virtual reality of the Oculus Rift and its Oculus Touch controllers.

Damaged Core is one of the best Oculus Rift games across all categories. During the campaign, which lasts about ten hours, the player has to fight a robot army determined to eradicate humanity. He can teleport from robot to robot to take control of them and use them against other machines. The pace is fast, the action is intense.

The Arcslinger, the best VR FPS on Google Daydream

The Arcslinger takes place within a Western universe. The Daydream Controller serves as a six-shot revolver to allow the player to move forward through a thrilling scenario. The player is tasked with restoring justice to a town populated by lawless bandits.

Serious Sam VR is a game that is both violent and fun. In this virtual reality adaptation of the famous franchise, the player faces a host of enemies using huge guns controlled by Vive Wands or Oculus Touch.

The Brookhaven Experiment, the most terrifying VR FPS

Sensitive souls refrain. The Brookhaven Express is one of the most immersive VR FPS, but also one of the most terrifying. Plunged into darkness, the player must face hordes of zombies surging from all sides using different weapons. Some zombies are human-sized, others are like gargantuan abominations. The feeling of danger is real, and the clashes are intense.

Space Pirate Trainer is a retro FPS VR, which will make older gamers very nostalgic. The aesthetics and gameplay are reminiscent of old arcade games, and the experience is fun and upbeat. The player takes on the role of a space pirate and must battle waves of droids while dodging their attacks to the beat of a fast-paced soundtrack.

Arizona Sunshine is a VR FPS featuring stunning graphics, realistic gameplay, and terrifying zombies. The action takes place in a post-apocalyptic world in which the player must face hordes of zombies. A good dose of humor and careful execution make this game one of the best virtual reality games available today.