Le hand spinner, also called fidget spinner, is the big fashion of the year 2017. Initially intended for autistic children, this spinning top is very effective against stress and anxiety. For several months now, the accessory has invaded the playgrounds, but also conquered adults thanks to its many benefits. In addition, dozens of viral videos are circulating on social networks, highlighting the figures and other tricks that can be performed using this small object. Even if some consider the hand spinner useless, its success phenomenon is undeniable.

Hand Spinner: an unusual, but realistic VR and AR application

In this context, the developer Ezone presents a virtual reality application called Fidget Spinner: Journey of Secrets. The title offers the player "to discover the mysteries of the fidget spinner during a journey through the ages". Of course, this ironic description conceals a much simpler concept. The user is content to spin a virtual hand spinner at will. A scenario has still been written to give the player a feeling of progress.

Each spin made by the spinning top brings the player closer to the next leg of their journey. Each spinner allows you to unlock something to get closer to the next spinner and unwind the narrative thread. otherwise, the developers have taken special care to ensure that the virtual hand spinner respects the physical properties, brightness and sound of a real spinning top. Perfectionists, the Ezone teams have gone so far as to sample the sounds produced by a hand spinner to transcribe them into the game. 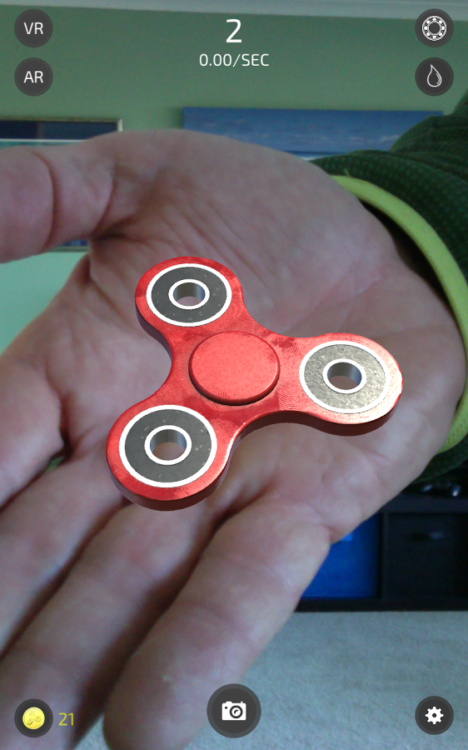 Fidget Spinner: Journey of Secrets is available now for free on the iOS App Store and the Android Google Play Store. The application offers a VR mode for Google Cardboard, compatible with iPhone and Android. In addition, an AR (augmented reality) mode allows the use of a virtual hand spinner in the real world via the smartphone camera. A simple and soothing application, recommended for people who want to fight against stress.

Following the success of Pokémon Go, many developers are trying to offer original augmented reality applications. A few days ago, we discovered Biodiv, which offers to capture insects instead of Pokémon, or VarDragons, an application capable of recognizing planes to transform them into dragons on the smartphone screen. With the upcoming arrival of Apple's ARKit, an advanced AR application development platform, unveiled at WWDC 2017, the number of augmented reality applications is in danger of exploding.