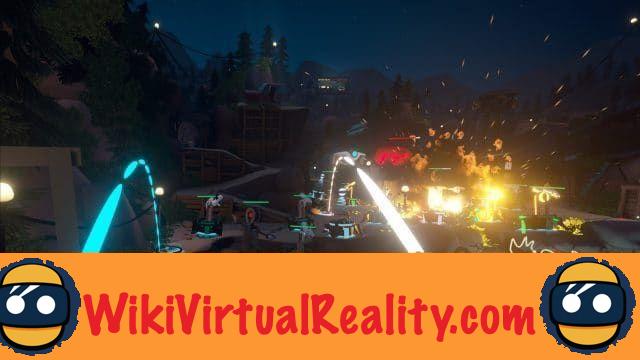 Home A Drone will be released on Thursday. This virtual reality FPS is inspired by Tower Defense type games. A new concept for VR in which the player will be totally immersed.

Virtual reality lends itself very well to many genres of games. Many classic game genres have been adapted for virtual reality with varying fortunes. The Tower Defense genre had however been completely obscured by VR. This is no longer the case with this upcoming release. A game to discover that could surprise. Explanations ...

Home A Drone: Tower Defense but not only

This is a game that will allow players to repel invasions of enemies. For that, it will be necessary to place defensive structures that automatically target and fire on approaching enemies. This model of Tower Defense is well known to gamers, especially with games like Defense Grid 2. However, unlike these games, Home A Drone, with the potential of virtual reality, allows you to jump straight into the action. in hand as in any classic FPS. An interesting novelty ...

According to Contruct Studio, the company behind this title, the story centers on DroneCorp, a company that wants to monopolize all forms of artificial intelligence. Scrappy, the game's drone, will then set up his defense strategy. Resource management will also be an essential point of Home A Drone. You will not only be able to acquire new weapons but also improve them. The game will be available in Early Access starting Thursday, September 19 at a price of 10 dollars. Only the HTC Vive version will be offered at launch. An Oculus Rift adaptation is planned soon.

Low-Fi, the cyberpunk world that should soon occupy your nights

REALM, a force feedback system compatible with the Oculus VR

Add a comment from Home A Drone: a virtual reality game inspired by Tower Defense