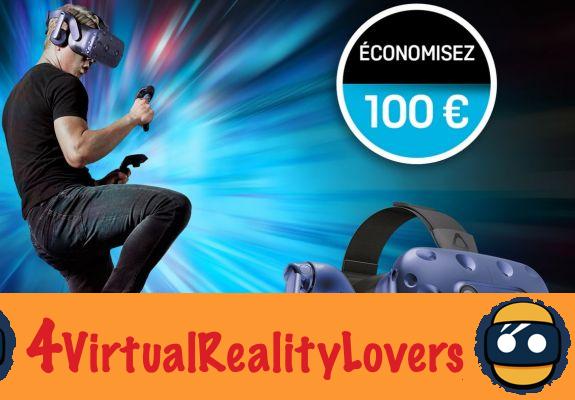 Black Friday is an opportunity to renew your technological equipment at a lower cost. An opportunity that only occurs once a year, and which should be taken advantage of. Regarding virtual reality, we have already told you about the good PSVR deals as well as the discounts offered for Oculus headsets. Let's see now what are the offers for the HTC Vive and its ecosystem.

Available since April 2018, the HTC Vive Pro is an improved version of the HTC Vive of 2016. This VR headset is distinguished by better screen definition, an integrated headset, an improved design, and compatibility with the new SteamVR Tracking 2.0 tracking system. This device is primarily intended for professionals, but it is also suitable for the most demanding gamers.

Perhaps the only real flaw of this VR headset is its price. However, as part of Black Friday, the HTC Vive Pro is offered with a reduction of 200 euros on the official HTC website. You can therefore get the Full Kit pack for 1199 euros instead of 1399 euros! This pack includes the helmet, two tracking stations 2.0, two Vive Wand controllers and two months of Viveport subscription. The Vive Pro headset alone, meanwhile, is offered for 779 euros with two months of subscription to Viveport, a reduction of 100 euros compared to the usual price of 879 euros. The offer is available at this address, and ends November 26 at midnight French time.

For their part, Viveport subscribers will be able to benefit from 10 euros to spend in the online store, and broken prices on a hundred titles with promotions of up to 95%. The Arizona Sunshine, Superhot, The Wizards, Accouting + and Sairento VR games are therefore offered for 1 euro. The subscription price is also reduced by 26% for three months, 44% for 6 months, and 63% for one year. You will receive a code for Fallout 4 VR as a gift. Offer to be entered at this address.

In addition to Black Friday, this Friday, November 23, 2018 is also the first day of the fall sales on Steam which will run until November 27, 2018. Enough to stock up on good games for your brand new HTC Vive Pro headset. Remember that Steam VR games are also compatible with Oculus Rift and Windows Mixed Reality headsets.

We find in particular Skyrim VR Doom VFR, Arizona Sunshine, Star Trek Bridge Crew, Google Tilt Brush, Rick and Morty VR et Titanic VR à -50%. Likewise, Superhot VR and Budget Cuts are offered at -30%. Project Cars 2 and Keep Talking and Nobody Explodes are available for a 67% discount, and Elite Dangerous at -60%. Battlezone Gold Edition is on sale at -75%, and Dirt Rally at -80%. Visit the Steam page dedicated to VR games at this address.