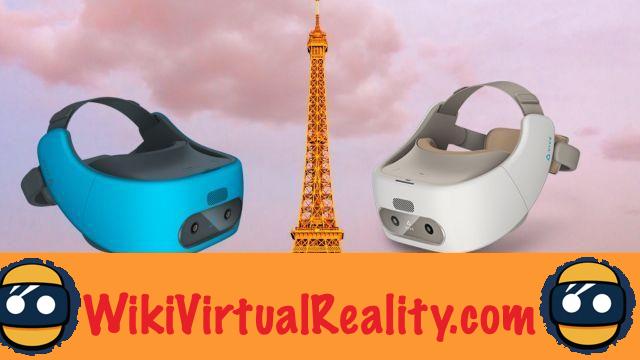 Initially launched in China in January 2018, the HTC Vive Focus standalone VR headset is available from November 9, 2018 in 37 different countries including Europe and North America. However, while it was launched in China as a consumer product, it will be offered in our regions as a corporate product. That said, it doesn't change much, since anyone can buy it from HTC's business website.

The device will be offered in two versions: Vive Focus, and Vive Focus Advantage. This second version comes with a professional services program such as a commercial license, an advanced material management system and privileged customer service. An Advantage + program will also allow you to benefit from an extended warranty. The Vive Focus alone is offered for 582.50 € (excluding VAT), while the bonuses of the Advantage program are charged an additional 130 euros (excluding VAT).

As a reminder, the HTC Vive Focus is an all-in-one autonomous VR headset with all the components necessary for its operation. The processor, graphics card, battery and display are built into the device. It therefore works without needing to be connected to a PC or smartphone. Additionally, with HTC's recently announced Six Degrees of Freedom of Movement (6DOF) controllers, this headset is a direct competitor to the Oculus Quest expected in Spring 2019.

These two autonomous helmets have many points in common. They carry the same Qualcomm Snapdragon 835 processor, the same 1600 × 1440 OLED screen definition, and offer similar freedom of movement. The main difference concerns the software part : The Oculus Quest runs on the Oculus platform, while the Vive Focus is based on HTC's Vive Wave platform. The content available is therefore that of the mobile version of Viveport.


With these two new VR headsets, the duel between HTC and Oculus promises to be tighter than ever for 2019. It remains to be seen whether the applications offered on Viveport will be interesting enough to compete with those of the Oculus Store. In addition, beyond the technical sheet, we will have to wait to be able to test the two devices to check whether they really offer an experience of a comparable level ...

CES 2017: Headsets, PCs, games and accessories, the best of the show

Samsung is not giving up on its augmented reality glasses project

TouchVR: a haptic feedback device for touching in VR

Add a comment from HTC Vive Focus: the autonomous VR headset is finally available in France