HTC Vive - No need for a PC anymore thanks to cloud gaming!

One of the main obstacles to the democratization of virtual reality is the cost of entry of this technology. Despite the recent drop in the price of Oculus Rift and HTC Vive headsets, it is still necessary to invest in a powerful PC at around 800 euros at least. However, HTC may have just found a way to remedy this problem. The firm has just announced its partnership with Dalian Television and Beijing Cyber ​​Cloud to launch the first virtual reality cloud service in Dalian, China. 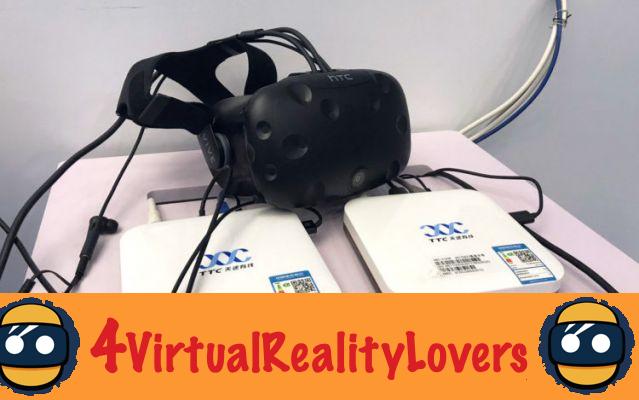 Thus, rather than having to connect the HTC Vive to the PC, consumers in this Chinese city can connect the headset to a Viveport box. This box offers a 60 Mbps connection, for VR and for general use. The game images are transmitted to the headset screen from the servers via the internet, and the commands entered by the player are transmitted to the server in real time. This is the principle of cloud gaming, already very popular in the field of traditional video games.

In addition to reducing costs, the cloud also saves players from having to download games, which saves time and makes the overall experience more enjoyable. As HTC Vive China President Alvin Wang Graylin points out, the service is comparable to Spotify or Netflix for virtual reality applications. Obviously, this solution is still in the testing phase, and has many weaknesses. There is currently some latency, and connectivity issues can make the system unusable.

In terms of costs, the rental of the box and the HTC Vive requires a deposit of 3000 yuan (455 dollars) and a monthly subscription of 500 yuan (about 76 dollars). The subscription is non-binding and can be terminated at any time. It's also possible to shell out 6688 yuan (about $ 1015) to buy the HTC Vive and enjoy a one-year cloud service subscription. Recall that the HTC Vive alone cost 5488 yuan in China, or about 835 dollars. The box offers access to a catalog of games currently comprising a few dozen titles and a library of 360-degree videos. Additional content will be added over time.

Anyway, when these technical limitations are overcome, cloud gaming could contribute to the democratization of VR, and provide HTC a significant advantage over its competitors. We can bet that the billion dollars that Google has just paid to HTC will allow the Taiwanese to develop this cloud service more quickly. It remains to be seen whether HTC plans to export this service to Europe, or whether it intends to reserve it for Asian countries. Indeed, for cloud gaming to operate without latency, the servers must be located in geographical proximity. Therefore, to internationalize this service, HTC will have to build data centers on all continents, even in all countries, or rent servers from a third-party provider.

add a comment of HTC Vive - No need for a PC anymore thanks to cloud gaming!