: the price does not include the wireless system of the headset which will be available later

Many were waiting for him, it's done, HTC has just opened pre-orders of his new HTC Vive Pro headset. To get this new VR crown, you will still have to pay 879 euros. Note that the controllers and base stations are not provided, they will have to be purchased separately. The first deliveries will start in April.

As for the first generation HTC Vive, it will still be sold by HTC and will even benefit from a price drop and will cost only 599 euros. 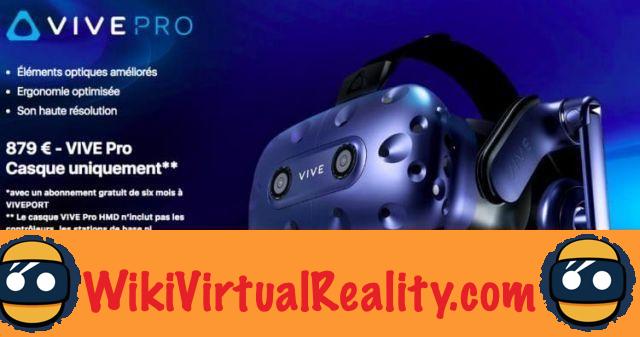 However, HTC offers 6 months subscription to Viveport for the purchase of HTC Vive Pro. A high price, of course, but which is justified by a system of high quality helmet. A first for high-end VR headsets that are HTC Vive et Oculus Rift.

To enjoy a wireless gaming experience, you must use TPCAST ​​terminals with HTC Vive, a brand that has not received only positive feedback from its customers. The WiGig Wireless system, to make HTC Vive Pro wireless will be released later this year.

HTC Vive pro: a VR headset at more than 1400 euros with accessories

If the helmet costs (only) 879 euros, it is necessary to count 600 euros more when buying for those who do not have the first version of the HTC Vive. Indeed, the two controllers and the two base stations cost 150 euros per unit. Or 600 euros of accessories to buy in addition which are not provided in the pack. At this price, there is no point in buying the accessories apart. The first generation headset, which comes with all controllers and base stations, also costs 600 euros.