Huawei brings out its ultra-compact VR glasses, but with 6 DoF 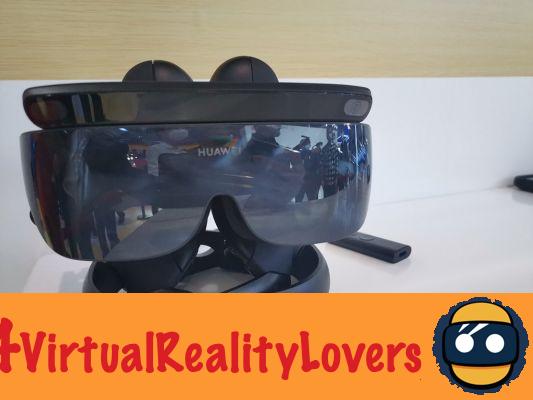 Huawei is announcing the release of a revamped version of its virtual reality glasses, VR Glass, released last year.

In fact, the model of the Chinese brand preceded all other VR headsets in the format compact released in 2020 and even HTC's Proton project. On the other hand, Huawei's device only offered 3 degrees of freedom (DoF) when it was launched.

With this new edition, the manufacturer ensures to make a big leap forward towards 6 DoF, the difference between the Go and the Quest of Oculus. Practically, these 3 additional degrees will allow you to move around in a virtual space, in addition to the movements of the head.

Huawei made its announcement during the World VR Industry Conference Cloud Summit in Nanchang in China last week. So few details have leaked out, several visuals of the product have surfaced on social media.

Huawei VR glasses: what they offer

In any case, there is a design that has hardly changed compared to last year's model. The only difference: a series of cameras at the top.

As accessories, we havethem 6 DoF controllers which look a lot like the Touch of Oculus. On the other hand, those of Huawei can be nested one in the other to serve as support for VR Glass. Watch for yourself in this video:

About the technical characteristics, it is not known if these new virtual reality glasses have improved components. As a note, the old version offered a display of 1600 x 1600 pixels per eye.


According to the UploadVR site, Huawei will begin delivery of the development kits at the end of the year for marketing around April 2021. No price range has been leaked, but last year's VR Glass cost $ 425 in China. .


Sadly, Huawei does not seem to plan a release in Europe for its VR glasses. We'll keep you posted if that's the case.

add a comment of Huawei brings out its ultra-compact VR glasses, but with 6 DoF