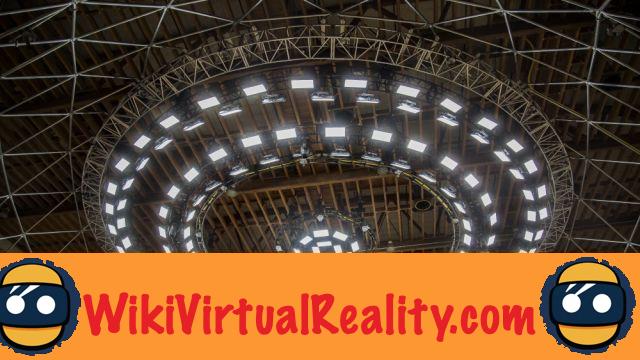 Intel is diving into the creation of virtual reality content. He thus uses a video technique: volumetric capture, which consists of 3D scanning objects using a matrix made up of several cameras. This method makes it possible to capture objects, just like real environments. The result is a three-dimensional representation that can be integrated into virtual reality content.

The studio spans over 2300 square meters with a computer system capable of competing with those of Nasa. This actually the largest virtual reality video capture center in the world. Intel thus claims to own the innovation of the future in the film production industry.

This massive prototype thus attracted the film studio Paramount Pictures, who wants to develop VR content for the general public. The potential of this technology could attract other Hollywood production companies.

Experience the Winter Olympics without being there

The same process will allow cover 30 Olympic Winter Games events entirely in virtual reality. They will be broadcast live using 3 to 6 cameras, thus offering as many perspectives. But he doesn't want to stop there, with an ultra-immersive sound recording system to immerse the viewer in the action.

For the broadcast, Intel called on the American television channel, NBC. She had made some videos VR at the Rio Olympics, viewable on a Gear VR.

So many partners that allow the processor manufacturer to develop its virtual reality business.

In addition to the live broadcast of the events, Intel will allow a VR tour of the Olympic site and the different installations. Why not fly above the athletes' village while staying at home.

Intel is turning away from VR headsets for its studio

The American giant is thus turning away from its "Alloy" project, which promised a autonomous fused reality headset (merged reality). While the HTC Vive pro wireless has just been unveiled, the American giant wants to turn away from the "hardware" market to focus on the software part. Intel has for priority to develop VR content, instead of rushing into the saturated market for virtual reality headsets.

add a comment of Intel unveils its virtual reality studio