Jean-Michel Jarre celebrates music with the VR concert “Alone Together” 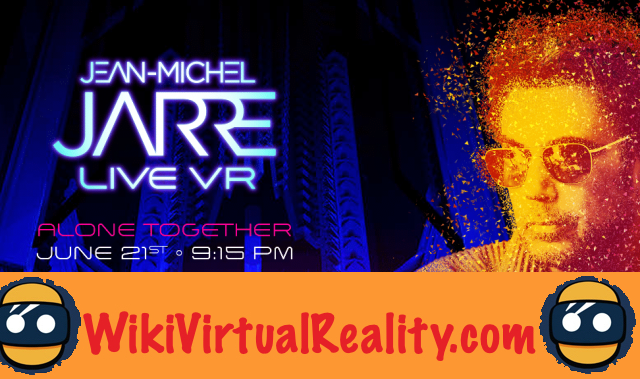 To celebrate the Fête de la Musique, Jean-Michel Jarre will have his avatar mixed during a live VR concert entitled “Alone Together” (only ensemble).

Completely for free, the event will therefore take place on June 21 at 21:15 p.m. on the VR VRrOOm social network (available via VRChat). Those who do not have the necessary equipment to enjoy the virtual reality performance will be able to watch live (2D and 3D) via traditional social networks.

If we are to believe the organizers, it would bea first since musical performances broadcast in VR have always been pre-recorded until now. In fact, this VR concert is not trivial for Jean-Michel Jarre. Indeed, the artist wants to prove that performing live in front of an audience, even a virtual one, is important. A conviction that many musicians certainly share.

For the occasion, VRrOOm, led by its founder Louis Cacciuttolo, brought together a skewer of artists and technicians to develop the virtual environment. Their promise? Do not visually distinct immersive world of what already exists.

Jean-Michel Jarre in live VR and in "concert" in Paris ...

Nevertheless, Jarre will have a real crowd to listen to him, in addition to the people who will attend the concert from their homes. And for good reason, the concert will be broadcast "in silence" on the big screen in the main courtyard of the Palais-Royal in Paris. The public present will then be able to listen to the music via a smartphone.

Unfortunately, this time it will be an event reserved for students who will be able to chat with the artist's avatar once the concert is over. Jarre's ambition seems to know no bounds. And the man seems to think VR and AR don't have one either. According to him, they could do for the performing arts what the cinema did for the theater.


In any case, if you want to write the pages of the history of VR with Jean-Michel Jarre, meet on June 21 on VRrOOm or on Facebook and YouTube for the Alone Together concert. And at the Palais-Royal for the lucky few.