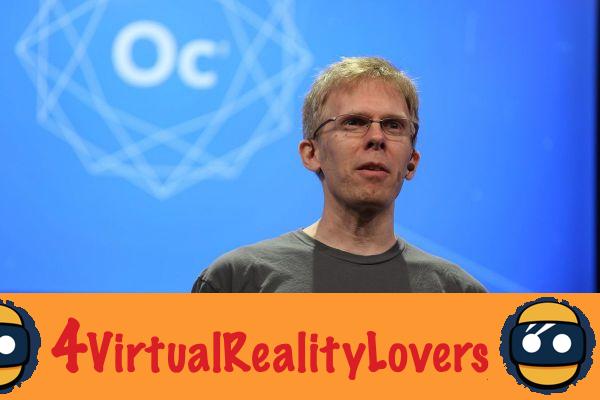 As part of the VR Awards 2019, John Carmack has just been crowned with a “Lifetime Achievement” award to reward him for his work as CTO of Oculus VR and for his entire career in the industry. video game. Remember this genius programmer co-founded id Software, and that we owes him great classics such as Doom, Quake or Rage.

According to AIXR President Daniel Colaianni, John Carmack “has been an inspiration to all of us in the virtual reality industry and we are proud to recognize the work he has done and the immense impact he has achieved. he continues to have ”. In his view, “as hardware and technology continue to evolve, John will undoubtedly lead innovation in VR ».

John Carmack says VR is still in its infancy

This award given to John Carmack by the virtual reality industry is particularly prestigious, since it is the first Lifetime Achievement Award given since the first edition of the VR Awards three years ago. In a video recorded as an acceptance and thank you for this award, Carmack believes, however, that this award may be "premature" because VR is still in its infancy.

Thus, this renowned influencer says he is "dissatisfied" by the rate at which the industry is evolving and progressing. As soon as he puts on his VR headset, Carmack admits not being able to think of anything other than the many things that remain to be accomplished. He therefore believes that he "will need a little more time to feel really proud of his accomplishments" ...

Moreover, although he admits having started to embark on VR in the 1990s, he considers that the modern era of virtual reality begins with the prototype of Palmer Luckey's Oculus Rift that he helped present. at E3. Although VR has come a long way since then, John Carmack believes that it remains confined to a niche market. He admits to helping lay the groundwork for VR, but considers this to be just a blank canvas for content creators to compose...

Lunar: the Moon in your hand and an augmented reality app ❯

The 7 challenges of virtual and augmented reality

A WebVR hackathon with $ 30 and 000 months of acceleration