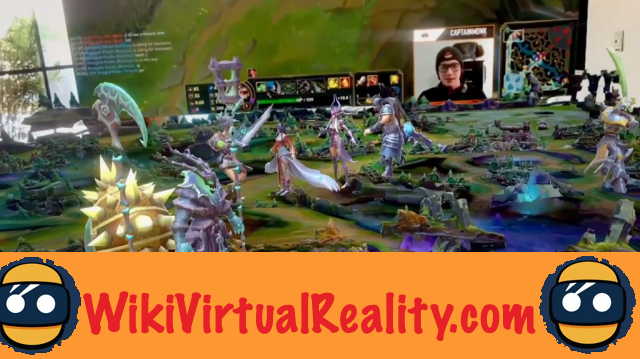 A few weeks ago, Google unveiled ARCore, an augmented reality application development kit designed to compete with Apple ARKit. Today, as part of its Ask More conference, the Mountain View firm wanted to demonstrate the possibilities offered by the platform through a series of applications.

League of Legends: an application to view matches in augmented reality

Thanks to the League of Legends AR app for Android, fans of the famous MOBA game will be able to view matches in augmented reality. The battlefield will be materialized on a flat surface, such as a table, and the spectator will be able to turn around the table with his smartphone to contemplate the action from the angle of his choice.

Cette app was developed using Google ARCore SDK by Grab Games, creator of VR boxing game Knockout League and FPS VR John Wick Chronicles. According to the developer, this app offers a glimpse of how we will view traditional and electronic sports in the future.

Along with this LOL app, a Lego AR app was also presented by Google. This application simply offers to assemble Lego in augmented reality. The virtual parts appear on the smartphone screen, superimposed on the real environment, and the user is free to assemble them as he wishes. The principle is in all respects similar to that of the Lego Brickheadz Builder VR application available on Google Daydream. These two applications will soon be available on the Android Play Store.

In addition to these augmented reality apps, Google also unveiled the AR Stickers experience. It is in fact a ffunctionality built into the camera app of the new Pixel and Pixel 2 XL smartphones. Only owners of these devices will therefore be able to benefit from them.

This feature allows use augmented reality animated objects and characters creatively by incorporating them into real-world video captures. For example, it's possible to place an animated coffee cup on your desk, or add augmented reality balloons to a birthday video.


Over time, AR sticker packs will be added. Google already announces packs from the famous Star Wars saga, the hit Netflix series Stranger Things, or stickers featuring the stars of the NBA.