Married to a hologram ... until a refresh separates them 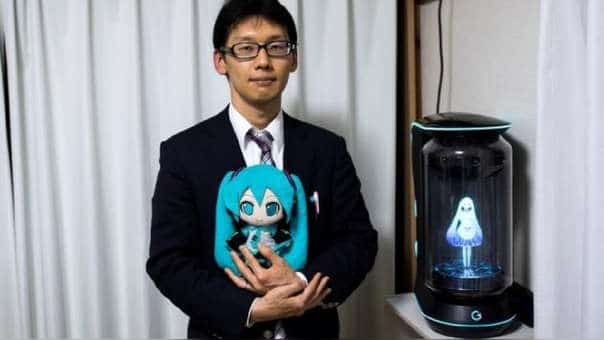 The Japanese who got married to a hologram character in November 2018 will lose this one ... because of a system update scheduled for May 31, 2020.

The unusual marriage between Akihiko Kondo, a 36-year-old Japanese man, and Hatsune Miku, a virtual computer-generated character, caused a stir at the time, raising mockery, enthusiasm and incomprehension. However, during the ceremony, no one told him " until an update does my part ". Indeed, the man should lose his virtual wife during a system update scheduled for the end of May 2020. It's a bit nerdy!

Akihiko Kondo is a huge fan of anime and manga-type comics. He had married with great pomp Hatsune Miku, a 16-year-old virtual singer with turquoise hair. This virtual character, represented in the form of a hologram, is very famous in Japan. Even if this marriage is obviously not recognized by the authorities, a real ceremony had been organized. Akihiko had spent more than 17.600 dollars for this wedding ceremony during which he had, in a symbolic way, placed a ring on the finger of a plush representing his beloved. The press had come in large numbers to follow this rather unusual information.

However, according to information relayed by RPP, the hologram works on a Gatebox equipment which will need a new system from this date to continue functioning. The Crypton Future Media company that manufactures these computers has promised Akihiko a new GTBX-100 type machine, but his virtual wife will disappear. A new installation on a new computer will reboot the character. Asked by the press, the young man has indicated that he will continue with the new hologram but is not sure whether to remarry. Not sure, however, that a new marriage with each new update is a good solution.

Virtual reality training appeals to all types of companies

Add a comment from Married to a hologram ... until a refresh separates them