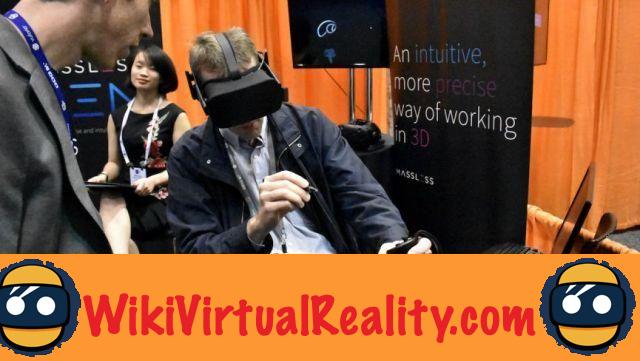 Created by Massless, a startup based in London and San Francisco, the Massless Pen allows you to point objects in virtual reality with precision, but also to write intuitively in virtual environments. The accessory could prove to be very practical for design, manipulation of objects, analysis and collaboration, particularly in the fields of animation, civil engineering, and mechanical engineering.

Massless Pen: an intuitive and precise accessory for interacting in VR

The accessory was invented by Jack Cohen, CEO of Massless and passionate about virtual reality. This The latter is firmly convinced that the immersion offered by VR can be used for precise and complex 3D modeling applications. It is possible to use VR to navigate intuitively, because everyone knows how to use a pen. Working in 3D has always been slow and painful on traditional 2D screens. However, in VR, it is possible to rotate the models until you get the correct viewing angle to better understand them. In addition, the pen allows you to manipulate these 3D models very easily.

According to Massless, this pen increases productivity and profit. The firm hopes to revolutionize design thanks to VR. It ensures that this VR pen is very precise, responsive and intuitive. Her accuracy amounts to 0,05 millimeter. One user can create a design in VR, while another person reviews the rendering in real time.

Among the main investors in Massless are Super Ventures. The investment arm chose to finance the project last spring, considering that the keyboard and mouse are obsolete within virtual reality. He believes there is a need to reinvent the way we interact with the virtual world. Super Ventures were looking for a precise and intuitive interface so that they could bring the immersive power of VR to professionals such as engineers and designers. By turning her prototype into a finished product, Massless has proven herself capable of meeting the challenge.


The Massless Pen will be marketed in 2017, but the company has not yet revealed its price. This VR pen is mainly intended for engineers and designers. To operate, it requires a VR-ready PC, with at least 16GB of RAM, an Nvidia GeForce GTX 1060 graphics card and an Intel Core i5 processor.

A USB 2.0 cable can now be used for the Oculus Link ❯