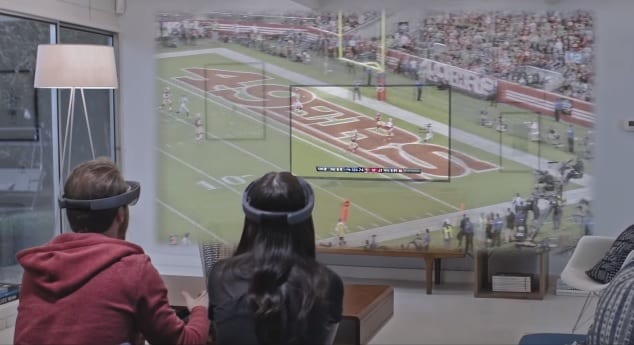 Imagine being in your living room watching an American Football game, from the comfort of the sofa. Microsoft imagined what could give an augmented reality Super Bowl game, and the result in sending full view!

The multitude of interactions the headset offers is incredible. With just a few finger movements, statistics on the players, on the match or on the stadium, appear in your living room. Turn the camera to make the most of the match or even zoom in on a player or the ball, during an action, all of this was imagined by Microsoft. They even went so far as to have a player appear in your living room at full size. Clearly, all surface is usable by augmented reality, so that the immersion is total, the possibilities seem limitless.

Of course, for the moment we are far from it, Microsoft announced on October 6, 2015 that the HoloLens will be available for the modest sum of € 3 for developers from September 2016. So from there until the general public can have access to it, for the Super Bowl, it takes at least a year, more probably two, but it also allows Microsoft to polish your helmet. And the American firm takes advantage of this time, very regularly, once a month or so, a new HoloLens technology arrives almost as if by magic. Microsoft recently demonstrated Holoportation, and who knows what they're up to for the next video? So it is true that the wait before marketing the product may be still long, but if this expectation benefits technology headphones, so why go without? On the other hand, after all the videos that we have seen and all the videos that will come, we all expect an augmented reality headset finished, but especially with care. So we will take our trouble patiently, and wait wisely for the HoloLens to show the tip of its nose, and for that we can already make a leap into virtual reality with theOculus Rift or the HTC Vive, which are available for pre-order and especially on the point to be delivered !