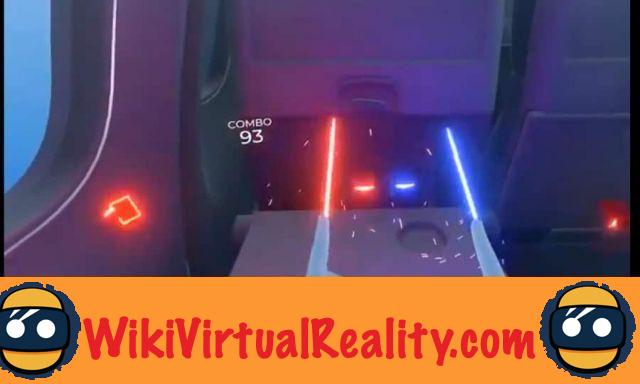 Developer Daniel Beauchamp posted some videos of an interesting AR game concept. Better known on Twitter under the pseudo pushmatrix, he is renowned for experimenting and offer crazy concepts in VR or AR. However, since Oculus paved the way for tracking hands on its Quest, many projects have emerged. This time it isa miniature Beat Saber played with the fingers.

The three videos that present his concept all take place in the same place. Thus, installed in the seat of an airplane, the developer has fun cutting mini cubes with lightsabers that come out of his fingertips. If the easy mode makes you reproduce some gestures of a conductor, the expert mode seems a little more confusing. Rather, it gives the impression of find yourself in the shoes of Edward the Silver Hands while trimming a hedge or doing a lady's hairstyle.

Even if it is unlikely to see this game arrive soon in our helmets, it foreshadows what could result an augmented reality adaptation of popular virtual reality experiences. Indeed, for the moment the too high latency of the Oculus Quest hand tracking option prevents this kind of concept from being viable. However, nothing says that when this option improves, we can then bring a Miniature Beat Saber on the road, everywhere with us. It's like the travel version of board games, perfect for playing on an airplane.

Daniel Beauchamp, who runs the AR and VR section of Shopify, this is not his first attempt. His Twitter feed is full of projects mostly involving experiences around augmented reality and hand tracking. So we'll have plenty of fun when Facebook officially decides to launch its Hand Tracking system.

PSVR: everything about the virtual reality headset for the PlayStation 4 ❯