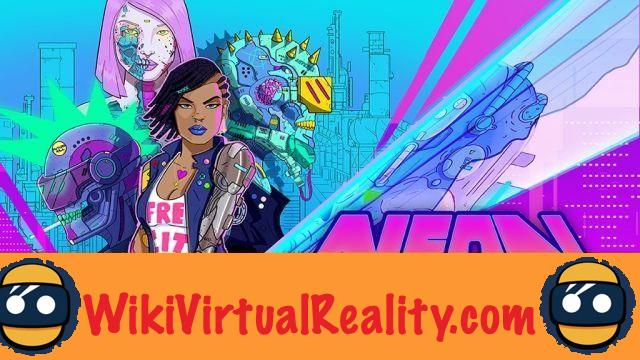 We are in the year 2088. Most human beings have embraced immortality in letting go of their physical form to transfer their consciousness to the OmniVerse, a huge computer system spread across the galaxy. The last human beings must survive on a planet Earth abandoned to itself.

The stage is set. Created by Rob Shields, Neon Wasteland is a comic strip inspired by Japanese cyberpunk cartoons from the late 1980s. However, in addition to its flashy colors and psychedelic atmosphere, the work is distinguished by an original feature: it is of the first comic book in augmented reality.

The concept is very simple, but totally awesome. A companion app is available for free on iOS and Android. Once the app has been downloaded, the user can point their smartphone at the different pages of the comic strip in order to see animated versions of the illustrations on their screen. So the action scenes come alive on the phone.

The application also allows make choices that will change how the scenario unfolds. There are also bonus features to explore the different environments of the comic in more detail, or to interact with the characters.

Neon Wasteland is a big hit on Kickstarter

Funded through a Kickstarter campaign, the project has already exceeded the target of 3746 euros set by its creator. Currently, there are 21 days until the campaign ends and Neon Wasteland has raised 6000 euros from 142 backers.

The first volume of the comic will be offered in digital version from May 2019, for 10 dollars. The physical version, meanwhile, will be offered for $ 15. The release date is also scheduled for May 2019. Several special editions are also offered. The most expensive, priced at $ 1000, is the Hardcore Edition. Those who opt for this version will be directly integrated into the rest of the comic book.


There are already several virtual reality comics, but this is the first time that we have discovered an augmented reality comic. Neon Wasteland brings together many great ideas, and could serve as a leader for future works. Obviously, we will probably have to wait for augmented reality glasses like the Magic Leap One to become more democratic so that more designers embark on such projects.