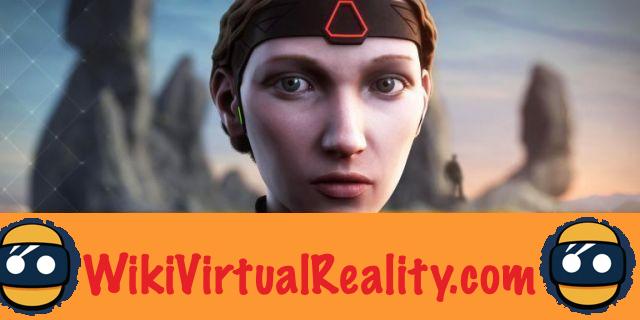 Virtual reality is a fascinating subject, which increasingly interests screenwriters in literature as well as in cinema… and on television. This March 28, 2018, the film, directed by Steven Spielberg and adapted from the eponymous novel by Ernest Cline, is released in French cinemas. This big budget blockbuster could well fto discover VR for those who do not yet know this technology.

Netflix Kiss me First: a futuristic series on virtual reality

At the same time, a trailer for a new series has just been posted. Entitled, this British soap opera features the heroine Leila (played by Tallulah Haddon). This young woman is completely addicted to video games, and more precisely to virtual reality. Every day, she immerses herself in the virtual world of Argora.

To do this, she puts on her virtual reality headset coupled with an accessory bearing the name of Aznaband. This device makes it possible to transcribe the emotions as well as the sensations that the player's avatar feels. Joy, sadness, pleasure, pain… the user of Aznaband can feel whatever his character is going through. An exhilarating and terrifying glimpse into the future of VR.

As the trailer reveals, the series will combine real images with computer generated scenes (CG). Indeed, the passages taking place in the real world will be filmed using a camera, while the moments spent in the virtual world of Argora will be created from scratch. This will make it possible to distinguish the real world scenes from the scenes in VR, but also and above all to stage the fantastic possibilities offered by the virtual.

You will understand, has many similarities with However, the serial format should allow the creators of the program to offer a plot exploring more deeply the ins and outs of an ultra-realistic and addictive virtual world. We can in particular hope that the scenario explores the consequences on society and the psychology of users, or the different fields of application of this invention.

Anyway, and are far from being the first VR-themed fictions. Among the most cult works, we can notably cite, or more recently the famous manga which will also be adapted into a Netflix series in the near future.

Kiss me First will be broadcast from April 2, 2018 on Channel 4 in the UK. Subsequently, the series will be offered internationally on Netflix, but it is not yet known when.