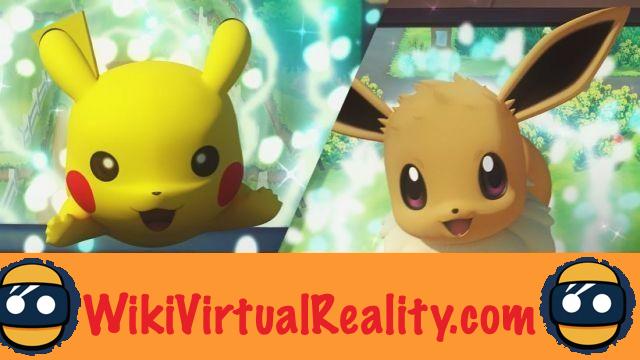 This May 29, 2018, the Pokémon Company held a press conference. As part of the event, Junichi Masuda surprised by announcing Pokémon Let's Go: a Pokémon yellow version remake, released on Gameboy in 1999, for the Nintendo Switch home console.

As a reminder, Pokémon yellow version is the third game in the saga. The title included the content of the red and blue versions, while adding elements from the cartoon : a Pikachu with a strong character who refuses to enter his Pokéball, or Jessie and James from Team Rocket. Even today, it is one of the games most adored by fans of the cult franchise.

This remake for Nintendo Switch will be available in two versions: Pikachu Version and Eevee Version. In the first iteration, the player will have a Pikachu as his starting Pokémon, while in the second, he will be accompanied by an Eevee. As a reminder, in the yellow version, it is the hero's rival who had an Eevee from the start.

Players will have the opportunity to roam the continent of Kanto, just like in the original game, and only the 151 first-generation Pokémon will be present in the adventure. Note that the forms of Alola, introduced with the Moon / Sun versions and soon integrated into Pokémon Go will also be in the game.

Of course, 3D graphics fully exploit the capabilities of the Switch. The other major difference with the Gameboy game of the time will be the gameplay. Rather than facing the Pokémon to capture them, players will have to directly throw the Pokéball with a gesture… as in the Pokémon Go game on a smartphone!


In this case, it will not be a question of sliding your finger on a touch screen, but of imitating a throwing movement with the Joycon. In addition, a Pokéball Plus controller will allow you to transfer creatures caught in Pokémon Go to the game for Switch.


The objective of The Pokémon Company is to bring together nostalgic veterans and young neophytes who discovered the franchise with the Niantic mobile game. Pokémon Let's Go will be available on Nintendo Switch on November 16, 2018.