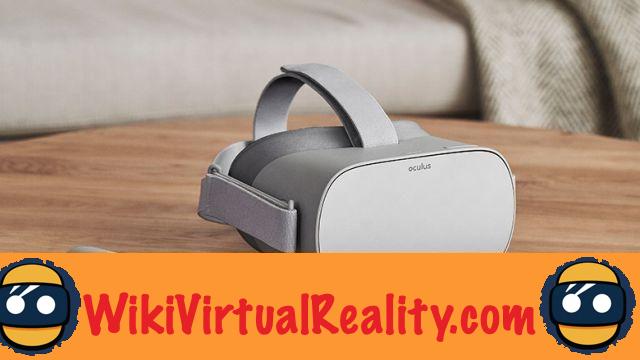 The first novelty presented by Facebook as part of the Oculus Connect 4 is the Oculus Go headset, a stand-alone wireless VR headset. Unlike the Samsung Gear VR, this headset does not require a smartphone to operate. Unlike the Oculus Rift, it doesn't need to be plugged into a PC. According to Mark Zuckerberg, the Oculus Go is the most accessible VR headset of all time.

Oculus Go: a completely independent mobile headset without a PC 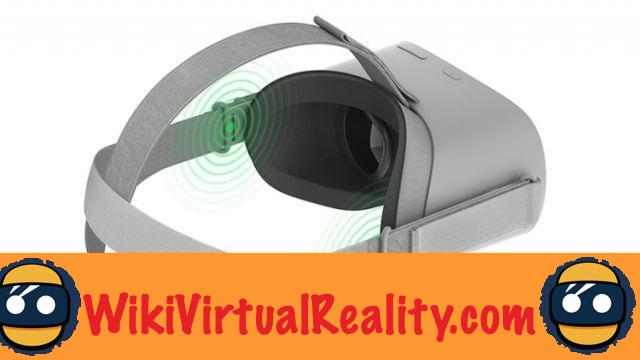 Obviously, this autonomous headset offers fewer possibilities than the Rift. Just like the Gear VR, the device allows you to turn your head but not to move freely. However, the helmet has integrated cameras and uses computer vision technology for the user's position tracking.

Made of a new fabric, the Oculus Go conforms to the shape of the user's face. It is also equipped with an elastic headband, new generation lenses improved over those of the Oculus Rift. The field of view is the same as that of the Rift, namely 110 degrees, and the blur effect is greatly reduced according to Vice President Hugo Barra. The fast-switch LCD screen offers a WQHD definition of 2560 × 1440. According to Hugo Barra, the pixel density is higher than that of OLED displays, the visual clarity is impressive and the screendoor effect is reduced.


Le headphones also offer integrated spatial audio. Thus, the audio drivers are directly integrated into the headphones, and the sound can be listened to without headphones. So the people around the user can also hear the sound of the game or the current experience. The applications are the same as those offered on the Gear VR. The Gear VR's 3-degree-of-freedom Bluetooth controller is also compatible. Note that the helmet also offers 3 degrees of freedom of movement, against 6 for the Oculus Rift.

In January 2018, the Oculus Go headset was certified by the FCC. The document reveals that the device will be available in two versions. The MH-A32 model will offer 32GB of internal storage space. The MH-A64 meanwhile will offer 64GB. It is not yet known whether it will be possible to expand this storage space using a microSD card.

As part of CES 2018, we have just learned that the Oculus Go will be manufactured by the Chinese smartphone manufacturer Xiaomi. In addition, a version reserved for China of the Oculus Go will be sold under the name of Xiaomi Mi VR Standalone. The choice to sell this headset under the Xiaomi emblem should allow a better penetration of the local market, thanks to the confidence that Chinese consumers have in this brand.

Also at CES, Xiaomi unveiled that the Oculus Go, like its Mi VR Standalone, would be equipped with a Snapdragon 821 processor. This mobile processor dated 2016 was notably embedded by smartphones like the Google Pixel, the LG G6 or the Xiaomi Mi Note 2. It offers slightly more power than the Snapdragon 820 of Samsung's Galaxy S7. The experience offered by the Oculus Go should therefore be comparable to that of a Gear VR coupled to a Galaxy S7. 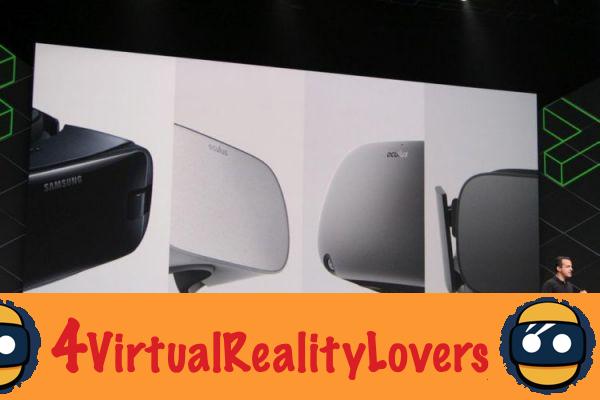 Unlike the Samsung Gear VR, the Oculus Go is an all-in-one standalone VR headset. So there is no need for a smartphone to use it. The headset has its own processor, screen and battery as well as its own sensors. It is therefore significantly more affordable than the Gear VR, which requires a high-end Samsung smartphone to operate.

Another difference with the Gear VR is that the headset does not seem to have a touchpad. It will therefore be necessary to use the Bluetooth motion detection controller to use it. In reality, even if the experience offered should be similar to that delivered by the Gear VR, the Oculus Go is closer to the all-in-one standalone HTC Vive Focus headset that will be launched in China in early 2018 by HTC. Samsung is also preparing a standalone headset for 2018.

As part of the GDC 2018, Oculus revealed that the Oculus Go would offer an optional mode offering a 72Hz refresh rate (like the future Oculus Santa Cruz headset). The fluidity of the images will therefore be greater than that of the Samsung Gear VR, which is satisfied with a refresh rate of 60Hz.

However, since most of the apps available at Go launch are ported directly from the Gear VR, the Go will default to a 60Hz refresh rate. To allow users to take advantage of 72Hz mode, developers will need to modify their applications first in order to bring this catch in cahrge.

A higher refresh rate allows a smoother display, and therefore more realistic graphics. So the sensation of immersion in VR will be amplified compared to the Samsung Gear VR.

Go Live Focus eye vs HTC and Lenovo only MIRAGE 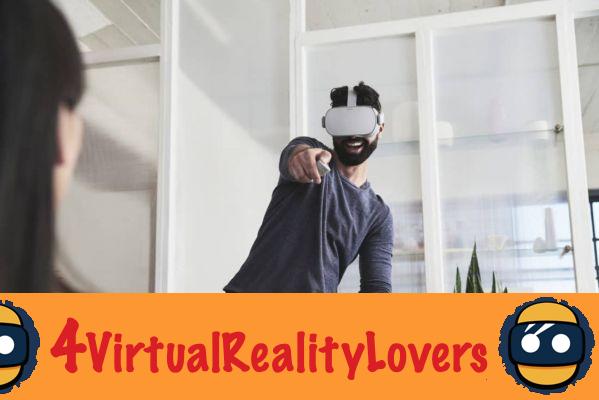 The main competitors of the Oculus Go in the nascent stand-alone headset market are the HTC Vive Focus and the Lenovo Mirage. Faced with these two rivals, the advantage of Go is its price of 200 dollars, against $ 400 for the Lenovo Mirage Solo and $ 600 for the Vive Focus.

However, this lower price also implies several weaknesses in the face of the competition. The main disadvantage of Go is the lack of Room Scale tracking. If the user leans or moves around their room, these movements will not be recognized by the Go.

Oculus Go: what games and apps will be available at launch? 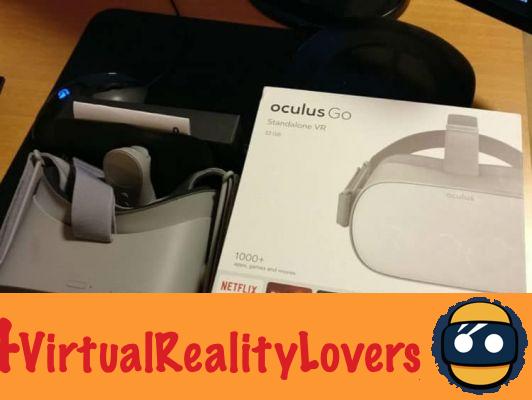 A leaked image on Reddit unveils the packaging of the Oculus Go in early February 2018. This image reveals some of the applications that will be available when the device is launched: Netflix, Hulu, Ultrawings, Facebook, The New York Times...

In total, the box announces more than 1000 games and applications compatible from launch ! It is likely that all Gear VR applications are compatible with the Oculus Go. The standalone headset should allow access to the same Oculus Store.

The packaging also states 32GB of storage space. It can be deduced from this that several variants will be offered with different storage capacities.

As part of the GDC 2018 in San Francisco, the Compatibility of the Oculus Go with Unity has been confirmed. Developers will therefore be able to use Unity to create games for Oculus Go. Samsung Gear VR games created with Unity can also be easily ported to Oculus Go.

Also as part of the conference, Oculus announced several new games for Go. In total, three titles have been unveiled. These three games will be available when the headset launches.

The first game is, available on Oculus Rift and Samsung Gear VR since March 2018. Directly adapted from the famous board game , this virtual reality port offers an experience in all respects similar to that of the original board game, with social features allowing player avatars to interact with each other during the game. Go version users will be able to join Rift and Gear VR users.

The second game is, a sequel to the hit game series published on Gear VR and developed by OZWE Games. As a reminder, the games are arcade-oriented space simulations, offering players to pilot heavily armed ships to destroy hordes of enemies.

As its name suggests, this new opus will be distinguished by online multiplayer features. Players will be able to cooperate or compete in PvP mode. More than 50 different missions will be offered. The game will be available on Oculus Go, but also on Gear VR and Oculus Rift and users of all three platforms will be able to play together.

The third Oculus Go game announced during GDC 2018 is entitled . This is a game developed by Coatsink, to whom we owe the excellent Samsung Gear VR. The player embodies one of the last survivors of humanity and must manage to infiltrate the robot society by passing a series of tests.

Le title includes a dozen different mini-games. It will also be available on Rift, Gear VR, and Oculus Go, and users of all three headsets will be able to play together. 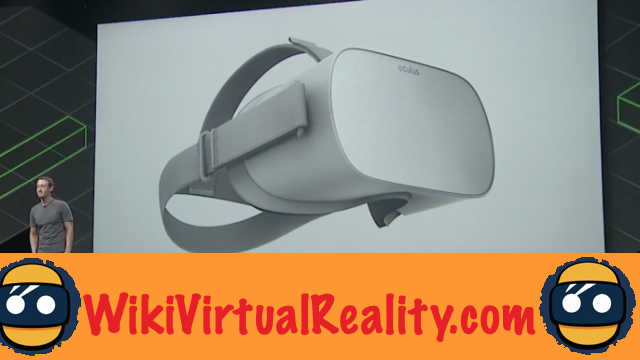 Oculus Go Development Kits have been available since November 2017. The Oculus Go headphones will be available from the beginning of 2018 for a price of $ 199. According to the site, it is very likely that the Oculus Go will be officially launched during the Facebook F8 conference, in May 2018. Facebook has already warned that this F8 conference will be placed under the sign of virtual and augmented reality.

This autonomous headset will allow Oculus to renew its offer in terms of affordable mobile VR headsets. The firm will be able to emancipate itself from Samsung, even if the partnership around Gear VR will continue. At the start of the conference, Mark Zuckerberg announced that Facebook's goal is to bring together 1 billion users in virtual reality. This affordable and technically impressive headset should get him one step closer to that goal.

Design and Ergonomics : More free and usable immediately. The virtual reality headset works without being connected to a phone or a PC. The design, simple and clean, seems very comfortable, especially thanks to the support strap at the back of the head.

Application and features : Oculus Go will have its own application catalog. Games, 360 and social experiences, it remains to be seen if the visual quality will be there and that is the big question.

Quality / price ratio : Impossible to know the exact price of this new Oculus headset at the moment. According to our estimates, it will cost around 199 euros. We are waiting to see where this virtual reality headset will be placed in relation to the competition, especially with regard to the HTC Vive Focus.