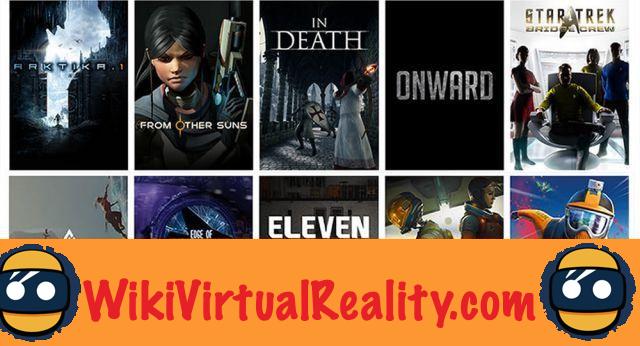 It has become a tradition. To celebrate summer, Oculus has once again launched a series of spectacular promotions on virtual reality video game packs. Many flagship games in its catalog are on sale. Unmissable game packs at less than $ 75 for 5 games to expand your library of VR video games at a lower price.

Promotions: the Sun Pack action and FPS at 74.99 dollars

The Sun Pack offers the games "From Other Suns", a space adventure, "Star Trek: Bridge Crew" a cooperation game that takes you back to the world of Star Trek, "ARKTIKA 1", a very immersive shooter in an apocalyptic world, “In Death”, another shooting game that will take you back to the Middle Ages and “Onward”, the tactical multi-player shooter. The Sun Pack is temporarily sold during promotions at just $ 74.99 here.

The Cool Pack offers 5 well-known adventure games. "Lone Echo" will plunge you into a space station, "The Climb" will take you up mountains, "Eleven: Table Tennis VR" will let you play ping-pong alone or against opponents, "Edge of Nowhere" will launch you into a frozen world to solve a mystery and finally "RUSH" will allow you to experience thrills in wingsuit. The Cool Pack is at the exceptional price of 74.99 dollars during the promotions period here.

The Oculus Beach Pack is mostly geared towards active people who see VR games as a way to let off steam. "Beat Saber" is the rhythm game phenomenon of recent weeks, "SuperHot VR" is also a particularly physical rhythm game, "BOXVR" will make you practice boxing, "Sprint Vector" will launch you into frenzied races and "OrbusVR" is an MMORPG only designed for virtual reality. The Oculus Beach Pack is on sale at just $ 74.99 here.

The Oculus Surf Pack is above all designed for fun. It offers the famous zombie shooter, "Arizona Sunshine", the wacky comedy of "Rick and Morty: Virtual Rick-ality", the puzzles and traps of "The Mage's Tale", the impressive arsenal of "Gun Club VR" and finally the RPG “Chronos”. The Oculus Surf Pack is on sale for $ 74.99 here.

Oculus did not only reward us with promotions for the Oculus Rift since virtual reality video game promotional packs are also available on Oculus Go and Gear VR here.

A WebVR hackathon with $ 30 and 000 months of acceleration ❯