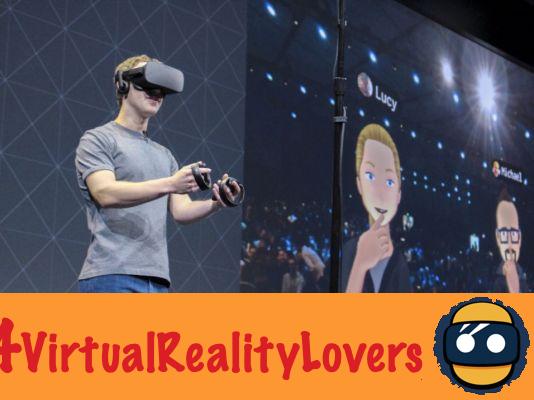 Since the acquisition of Oculus in 2014, Facebook has not despaired of revolutionizing social networks thanks to virtual reality. While waiting for the launch of its social network in VR, Horizon, in 2020, the firm is now launching new social features for the Oculus headset software platform.

Among the novelties, there is a functionality of instant messaging to chat with Oculus friends. It will also be possible to invite friends to join a game of VR games by sending them a simple link.

Users will also be able to create events in virtual reality to organize meetings or play multiplayer games, for example. In addition, sharing photos, videos, and even livestrams on Facebook from VR will now be possible. Finally, users can now create chat rooms open to all of their Oculus friends without needing to invite them directly.

Unfortunately, as you may know, besides social media and human relations, Facebook is also very or even a little too interested in personal data. In fact, without any real surprise, it will be necessary to log into Oculus with a Facebook account to take advantage of these new features.

Moreover, you will also be required to link your Facebook account to Oculus to be able to take advantage of features that already exist at the present time: join a game, add friends, visit another user's Oculus Home space, etc. until now an Oculus account was enough.

Oculus data will be collected by Facebook for ad targeting

According to the American company, the main objective is "to allow Oculus users to benefit from better security since social interactions will be linked to their Facebook identity". Nevertheless, there is no doubt that the goal is also to draw up a complete profile of virtual reality fans. by linking their activity in VR to their identity in the real world.


Oculus data will thus be used for advertising targeting purposes. Users who link their Facebook accounts will be able to benefit from improved advertising recommendations. These suggestions will be based in particular on the user's favorite VR applications and their activity in the virtual world. For example, he may be recommended Oculus Events or applications available on the Oculus Store.

Facebook says these changes do not affect games and applications developed by third parties. The firm also promises for the moment not to share the data with third parties for advertising targeting purposes ...

Note that it will not be necessary to link your Facebook account to use an Oculus headset and play the Rift or Quest games. However, this will be essential to take advantage of the "social" features attractive developed by the American giant.

Even if you choose to link your Facebook account to your Oculus account, you will be able to keep a separate Oculus username and profile and keep your existing Oculus Friends List. It will also be possible to choose whether you want to automatically add your Facebook friends to your Oculus friends list. You will also be able to control who can see your real name. Finally, the privacy settings will allow you to manage what information is published on your wall or your news feed.

Still, given the numerous privacy scandals that have tainted Facebook's reputation, it's worrying that GAFAM is dangerously coveting the personal data of Oculus players. As Oculus' original five co-founders left Facebook one after another, Oculus is now just a division of Facebook and these sudden changes to the privacy policy seem to be a direct consequence ...