Orange sees the future of sport in VR and 5G, stunning demonstration

From 2020, Orange intends to offer its first 5G offers. Today, in a video posted on its YouTube channel, the French operator offers us a glimpse of how this new, significantly faster mobile network will change the way we follow sporting events on television. A revolution which will include, in particular, virtual and augmented reality.

Thus, we first see a couple using a smartphone connected in 5G to be guided in augmented reality to its reserved seat at the Stade Vélodrome in Marseille. Likewise, a journalist equipped with a simple smartphone and a pole is able to broadcast her live in high definition thanks to 5G.

We then discover the new ways in which the new network will allow us to follow the sport. If the video shows that it will be possible to watch the matches with a wireless projector or even during a metro ride, the most interesting use case is the marriage between 5G and VR.

On her treadmill, a woman dons her futuristic virtual reality glasses. Thanks to this wireless accessory, she is able to immerse herself in the virtual while practicing her sports activity. Thus, the young woman is propelled on the track, between the runners of an athletics competition that she will be able to face from her living room. An innovative concept, which could make it possible for the first time to watch live sport while doing…

Orange wants to improve Duplexes thanks to 5G and VR 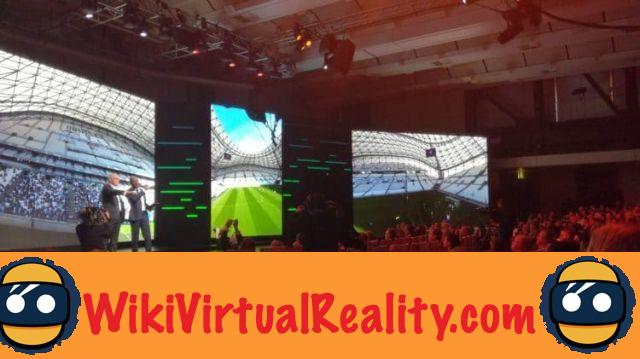 Along with this video, as part of the Orange Business Summit, Orange made a demonstration on how VR and 5G could improve duplexes during sports broadcasts.

Equipped with a haptic feedback controller, Orange CEO Stéphane Richard took the remote control of a Spider 360 360K 4 degree camera located at the Velodrome stadium. In the midst of training for Olympique de Marseille, the business manager was able to meet coach Rudi Garcia.

Le latency time between the two interlocutors was significantly lower to that of a traditional duplex, and 5G could therefore considerably improve the fluidity of exchanges between television channels and those present on site during sporting events.

According to Stéphane Richard, in the future, spectators could also be equipped with virtual or augmented reality headsets connected to such cameras. It would thus be possible to enjoy a live 360 ​​degree view of a match, with a simple 5G mobile connection.

5G and augmented reality at the service of businesses

In a second video on the uses of 5G for businesses, Orange shows how this new mobile network will allow remote maintenance operations. We discover a technician wearing a Microsoft HoloLens augmented reality headset on the tarmac of an airport. Thanks to his headset connected in 5G, he is able to receive detailed instructions for repairing the reactor.

Generally speaking, it is undeniable that virtual and augmented reality and 5G are two complementary technologies. Orange is far from being the only one to think so. Thus, according to HTC Vive, 5G could strongly stimulate sales of VR headsets by making it possible in particular to play streaming multiplayer games on mobile headsets like the Oculus Quest. Other companies have also used VR to demonstrate the potential of 5G, such as Qualcomm at CES 2019 or South Korean operators SK Telecom and KT at MWC 2019.

add a comment of Orange sees the future of sport in VR and 5G, stunning demonstration