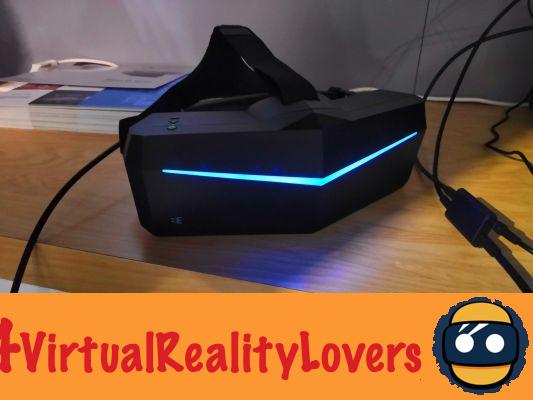 It's been several months since we cover the news of the Pimax 8K, a Chinese VR headset offering 4K definition per eye and massive 200-degree field of view. Technical characteristics that make it the most advanced device on the market, at least on paper. However, we had not yet had the opportunity to test this headset or take it in hand. It is now done, since we were able to take advantage of CES 2019 to visit the Pimax booth.

After a long queue, we finally got to try out the 8K headphones. Only a few games were offered for the demo, and we decided to try Fruit Ninja and Skyrim VR. On Fruit Ninja, the 8K definition is irrelevant since the graphics are particularly minimalist. On Skyrim VR, the graphics are indeed more detailed than on HTC Vive or Oculus Rift. However, the game remains a bit pixelated.

Overall, the advertised 8K definition is not as impressive as one might hope. We are like this far from the level of picture quality delivered by an 8K televisionHowever, on both games, the 200-degree field of view provides a greater sense of immersion. Unfortunately, during our tests, the right and left borders of the screen were strangely distorted.

One of the team members told us claimed that this effect was caused by the thick protection used to maintain helmet hygiene during CES. Hopefully this is actually the case. Otherwise, such a field of vision is of no interest ...

We also deplore a noticeable screen door effect on the screen, even as Pimax ensure to have eliminated this effect. This VR headset is therefore still far from perfect, even if its technical characteristics surpass those of the competition.


Pimax VR is convinced it can surpass Oculus and HTC

Anyway, the manufacturer seems firmly convinced of the potential of his helmet. Also within the framework of the CES, we had the opportunity to talk to Kevin Henderson, Pimax VR US COO.

According to him, the company from China has well and truly the intention to surpass HTC and Oculus to become the market leader in PC VR. To achieve this, the spokesperson believes that Pimax must achieve two objectives: be able to respond to demand in real time, and be able to provide customer service.

Regarding the first point, the firm believes that it will soon have finished processing deliveries from Kickstarter contributors and that all pre-orders will be processed by February 2019. Ironically, that's when a contributor broke into the stand to complain about waiting for his order since October 2018 ...

However, these delay issues should be resolved soon as Pimax prepares to open a production center in the United States. A support service for American customers will also be set up.

Asked about this by us, Kevin Henderson believes that Pimax does not need to develop exclusive content to become the market leader in consumer VR. Although this is the main asset of Oculus or even Sony with its PSVR, the company prefers to take the path of total openness. So, Pimax launcher allows you to launch any VR game including Oculus Rift exclusives without having to go through third-party software like Revive.


In conclusion, it goes without saying that the Pimax 8K is not yet completed. The Chinese company still has a long way to go to achieve its ambitions and compete head-on with Oculus and HTC. However, this product remains impressive and may well establish itself as the best VR headset when its issues are fixed.

add a comment of Pimax 8K: our grip of the VR headset at CES 2019 in video