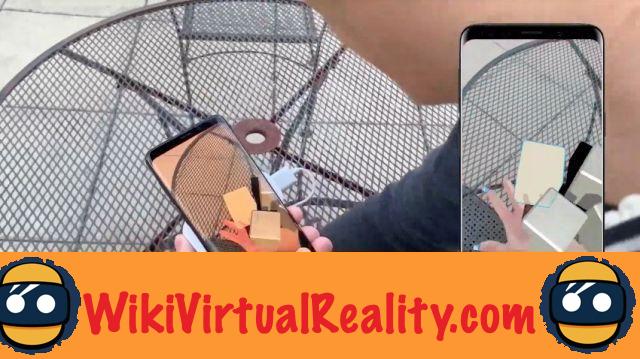 By mixing the virtual with the real, mobile augmented reality applications like Pokémon Go offer an experience of a new kind. However, even if the virtual images are superimposed on those of the real world filmed by the smartphone, interactions are always done by touching the screen like on a traditional application. The magic is very quickly faded.

In order to remedy this problem, researchers at Brown University have developed a software system called "Portal-ble". This allows smartphone users to place blocks, furniture or any other virtual object on a real background to then manipulate them in a realistic and natural way using their hands.

To enable such interactions, the researchers placed a small infrared sensor on the back of the smartphone. This component follows the movements of the hands in relation to virtual objects, allowing them to be grasped and released like real objects.

Initially, researchers wanted to apply the physical laws of the real world to their system. Unfortunately, they quickly realized that the task was not so easy. Users try to grab objects in the wrong place, or put their fingers through the objects. So the team had to watch carefully how users tried to interact with these objects and then allowed the system to adapt.

To facilitate interactions between hands and virtual objects, the researchers used sensory feedback or visual highlights as well as smartphone vibrations. These help users interact and feel physical contact when they pick up virtual objects. According to the testers, this feedback makes tasks easier and faster while making interactions more satisfying.


In the future, researchers plan to expand the library of virtual objects in their system, improve interactions and develop new activities. They also intend to allow the system to work on the smartphone without the need for an additional infrared sensor. Ultimately, this system aims to allow developers, artists or designers to use augmented reality without needing to wear a helmet ...