PSVR: Moss is the highest rated and most downloaded game 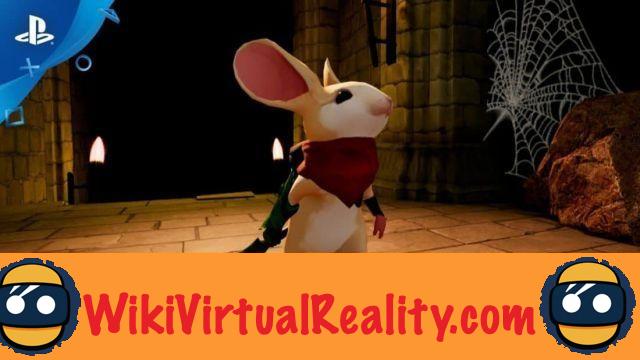 Over the years, video games have become a gargantuan industry. In 2017, SuperData estimates that this industry generated a total of $ 108,4 billion. In comparison, the cinema grossed around $ 40 billion over the same period.

Faced with the astronomical sums at stake, there are less and less room for passion and authenticity. More and more games are conceived and conceived as products, and not as works. Their purpose is to bring together as many players as possible, in order to generate as much money as possible.

In fact, veteran gamers generally struggle to recapture the magic of the video games of yesteryear, in which the devotion and love of the developers could be felt every moment. For this reason, when a modern video game manages to deliver these real emotions again, it should be emphasized.

PSVR: Moss is the most downloaded game in March 2018

Released in February 2018 on PlayStation VR, Sony's VR headset for the PS4, Moss is an atypical virtual reality game developed by Polyarc. The title is distinguished by the enchanting beauty of its graphics, but also by the originality of its gameplay. This is not a first person game. The player controls the Quill mouse in third person view, but must also interact with the virtual world to help the hero overcome the most imposing obstacles.

Thanks to his many qualities, Moss has met with impressive success since its release. Despite a release at the end of February (the 27th), the title has managed to climb into the top 10 of the most downloaded PSVR games of this month. For the month of March 2018, the brave mouse managed to make its way to first place in the ranking of the most downloaded games on the platform.

Even more impressive, after 550 player reviews left on the PlayStation Store, Moss managed to keep the maximum five-star rating. It is the only PSVR game to have accomplished this feat. By comparison, even great titles like Job Simulator, Skryim VR, or Superhot VR are rated 4,5 out of 5 stars.

If you're one of Moss's many fans, good news: the game was designed as the first chapter of a long saga. The end of the adventure leaves no doubt on this subject.

The sequel to this first installment has yet to be officially announced, but Polyarc Animation Director Rick Lico recently spoke on PlayStation Blog following the game's success. great ambitions and hopes that the warm welcome reserved for the game will enable them to achieve them without making the fans wait too long.

add a comment from PSVR: Moss is the highest rated and most downloaded game