Psychedelic VR: when virtual reality simulates the effects of drugs 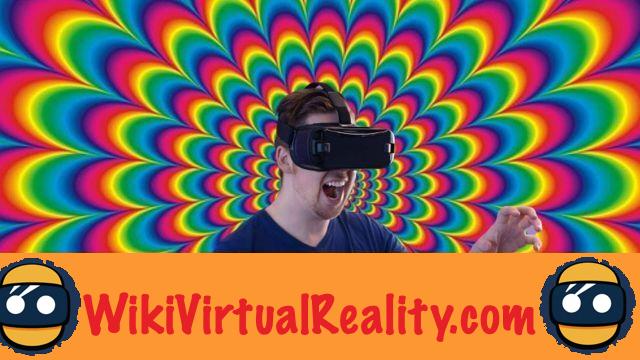 These various and varied drugs can allow to alter the state of consciousness of the human being, and thus allow him to know himself better and to understand the world around him. However, these toxic substances can also have a harmful, even fatal, impact on the body.

In order to allow everyone to enjoy the benefits of a psychedelic trip without jeopardizing your health, several developers seek to transcribe the effects of a "trip" in the form of virtual reality experiences. Here are the most successful examples.

Visionarium is a VR experience created with Google Tilt Brush that offers a trip to Ayahuasca, this plant consumed by shamans in the Amazon rainforest. Artist Sander Bos, creator of the experience, is convinced that virtual reality can generate physical effects by letting users immerse themselves in the virtual.

Although a VR headset does not directly influence brain chemistry like drugs do, and despite the current limitations of the technology, the artist is sure that it allows to simulate a psychedelic experience.

To do this, Bos feels that it is necessary to deceive the spirit to convince it that it is actually transported to another place. According to him, the experiment worked on some of his friends who have started to sweat on their palms and no longer feel their body like after actually consuming Ayahuasca. However, the artist admits that current technology does not allow the ego, dreams, fears, hopes and fantasies of the user to be taken into account like drugs do ...

Created by Robin Arnott, the Soundself experience aims to reproduce the effect of an LSD trip also known as acid. More precisely, it aims to place the viewer in the same state of mind as the artist when he consumed this drug several years ago and having led him to ”the revelation that he is only making one with the whole universe “…

Caring for feeling that is sometimes called the "death of the ego", because it is similar to that which occurs at the time of death. The memories come back suddenly and the person visualizes them in slow motion. While taking acid, Robin Arnott realized that there was no need for drugs or death to have this experience.

All like meditation and other transcendent practices, virtual reality can make it possible to reach this state step by step. At least, that's what the creator of Soundself is convinced ...

Once immersed in VR, the user visualizes patterns, lights, sounds and shapes. Each sound he makes changes these elements, giving him the impression of merging with the world around him. As the patterns unfold and expand… this VR experience for Oculus Rift was presented at PAX East 2016 in Boston.

The Ayahuasca (Kosmik Journey) experience is created by French director Jan Kounen. For many years, the filmmaker has been fascinated by this famous hallucinogenic shamanic plant. In 2004, in his western Renegade (aka Blueberry), he already addressed this theme in cinema. He has also written several books on the subject and made a comprehensive documentary on shamanism.

In this VR project, Jan Kounen tries to reproduce the experience induced by Ayahuasca through a succession of visual effects. The goal? To allow everyone to discover "how" the plant works, when the real experience may be "too strong" for a large number of people. In VR, it is always possible to remove the helmet to end the trip ...

The Acid Eye is a psychedelic VR experience created by German artist Schizo, who has over 25 years of experience in digital art. With the emergence of virtual reality, this artist has specialized in fractal animations using Mandelbulb 3D software.

Fascinated by nature, the artist likes to linger on the microcosm that surrounds us. In his virtual reality animation, he incorporates these elements in order to share his fascination with the spectators.

In addition to Mandelbulb 3D, Schizo used the Google Deep Dream neural network to create psychedelic structures from the initial images. A psychedelic soundtrack completes the experience to make it a real "trip" in the world of Mother Nature ...

With Feedback Delicates, Los Angeles-based multimedia artist Vinyl Williams takes us through a psychedelic journey through symbols from ancient civilizations such as the Egyptians, Babylonians, Assyrians, Mesopotamians, and Pagans. The objective of this mystical pilgrimage, according to its creator, is to succeed in extracting oneself from biological existence to reach an incorporeal stage ...

To make your videos in VR, Vinyl Williams aka Lionel Williams uses After Effects CS5 and CC17 for editing. He notably uses the effects "The Red Giant Universal" which he describes as fantastic. The artist also uses the Mettle 360 ​​° plugin.

Director, interactive designer, graphic artist, composer, VR pioneer, J Walt is known for 25 years for his performances and digital works of art. He contributed a lot to the evolution of computer animation.

His Rainbow Smokers virtual reality experience is a surreal vision of a world in which everything we need would emerge as bubbles from the basement. He then invented the details, created the images and the music to bring this hallucinatory vision to life ...

add a comment of Psychedelic VR: when virtual reality simulates the effects of drugs