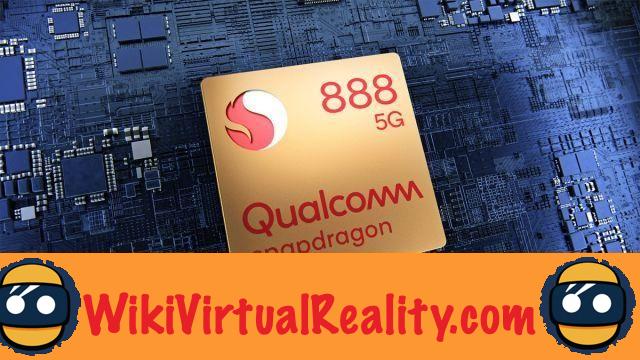 The virtual reality industry is moving fast, very fast. US chipmaker Qualcomm announces this week its new CPU: the Snapdragon 888.

According to the manufacturer, this chip is equipped with a GPU 35% more powerful than that of the Snapdragon XR2 embedded by the Oculus Quest 2. While Facebook's autonomous headset has been at the top of sales since its launch in October 2020, this new GPU could therefore make it obsolete from 2021.

As a reminder, the Snapdragon XR2 of the Quest 2 is a variant of the Snapdragon 865, which can be found in high-end smartphones of 2020. This variant is specially designed for stand-alone VR headsets.

Le GPU du Snapdragon XR2 est and Adreno 650, twice as powerful as that of the Nintendo Switch console. However, the Adreno 660 GPU of the Snapdragon 888 offers a real leap forward in terms of performance.

According to Qualcomm, never had such a jump been made between two successive generations of chips. The Adreno 660 offers 35% more performance, and 20% more energy efficiency.

Qualcomm Snapdragon 888: Towards a “pro” version of the Oculus Quest 2?

Therefore, we can imagine that Facebook decides to launch a “high-end” version of the Oculus Quest 2 much more expensive. This model would be intended for professionals, or the most demanding players.

It is also possible that another manufacturer decides to use this component to outperform Oculus in terms of performance. For example, HTC could offer a successor to the Vive Focus Plus which is equipped with the Snapdragon 835 from 2017 like the first Quest ...


Either way, we can be happy to see that the evolution of performance is accelerating in the field of mobile chips. This confirms that future standalone VR / AR headsets will deliver an increasingly immersive experience...

add a comment of Qualcomm Snapdragon 888: a new GPU 35% more powerful than the Oculus Quest 2