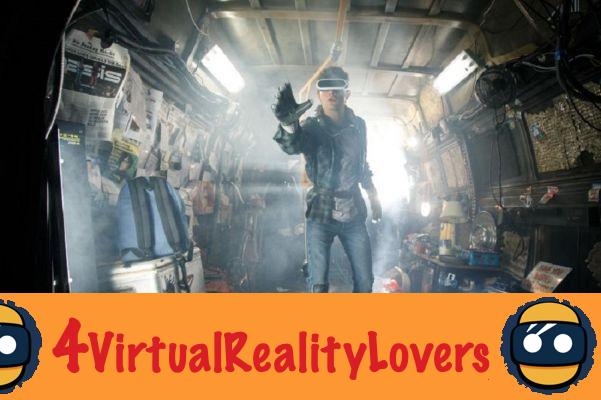 With Ready Player One, Steven Spielberg returns to his roots, to Sience Fiction. In the film, slated for release in March 2018, Tye Sheridan is a teenager looking for treasure in a world-class virtual reality game.

Steven Spielberg is also switching to virtual reality. Going to see his next film, no need to put on a virtual reality headset, his main character, played by Tye Sheridan, will already wear one.

Ready Player One will take place primarily in a virtual world

A new trailer for the film, scheduled for March 2018, was unveiled this weekend on YouTube. It stars Tye Sheridan, a young man with virtual reality headset in front of his eyes as well as a glove-controller on the right hand. He lives in a dystopian world where class differences have widened to the extreme. To escape this gloomy reality, there is a loophole: a virtual reality game called the Oasis.

In fact, it's more in this mystery than in a dirty van that will take place. The story will indeed follow a young man of 17, Wade, in search of a treasure left in the game by its creator. The latter, on the verge of death, has promised all of his fortune to anyone who will find 3 keys hidden in his virtual universe.

The game, Oasis, is the global virtual loophole that all of humanity uses to escape the problems of their world: energy and climate crises, famine, poverty, war ... If VR is so successful in the not-so-distant future, it's because the real world has deteriorated to become almost uninhabitable.

“Easter eggs” are hidden in the Ready Player One trailer

Since the trailer was released this weekend, internet users haven't stopped looking the many “easter-eggs”winks of the geek and pop culture universe scattered throughout the video. It features the King Kong gorilla, the DeLorean from the movie, the Tracer golem, Kaneda's red motorbike, the RX-78-2 Gundam from Mobile Suit Gundam, the batmobile from the 60s TV series, and the Mach Five. by Speed ​​Racer.

Ready Player One marks a promising return for Steven Spielberg in Science Fiction. It has been twelve years since he touched this genre : since the war of the worlds, in 2005. It remains to be hoped that the director of ET the extraterrestrial and Minority Report has not lost the hand.

In any case, it relies on an actor at the start of a promising career, although at twenty he is still young. Tye Sheridan is the interpreter of the Cyclops of the X Men license, which is rather handy: he is already used to the virtual reality headset.

A trailer unveiled at Comic Con this weekend provides a deeper insight into what Ready Player One will look like. Between flaming soundtrack and references in all directions, Spielberg's film promises action! We learn that the action takes place in “Colombus, Ohio” and that the character was born in 2025. We also see a number of chases, a DeLorean, Freddy Kugger, Akira's motorcycle… A rain of references guaranteed.

The mixture of genres is made possible, simply, by virtual reality. “Everything is possible in this world”, Steven Spielberg announced during the film's presentation at Comic Con. The director also took the opportunity to express his point of view on virtual reality in general which, as we will have understood, is the heart of this film.

A “blank canvas” which can turn out to be “dangerous”

Thanks to VR, this “blank canvas”, anyone can “do whatever it is possible to imagine”, explained the director of ET. But he also expressed his concerns about the possibilities this technology offers. “I think we are moving towards a dangerous medium with virtual reality,” he worried.


Not that Spielberg thinks of physical or mental danger, but cinematographic. “I speak of danger, because it gives the viewer the possibility of not following the direction of the narrators and of choosing for himself where to look. I just hope he won't forget the story when she begins to wrap him in a world he can see all around him and let him choose where to look. ”

add a comment of Ready Player One: Spielberg goes VR