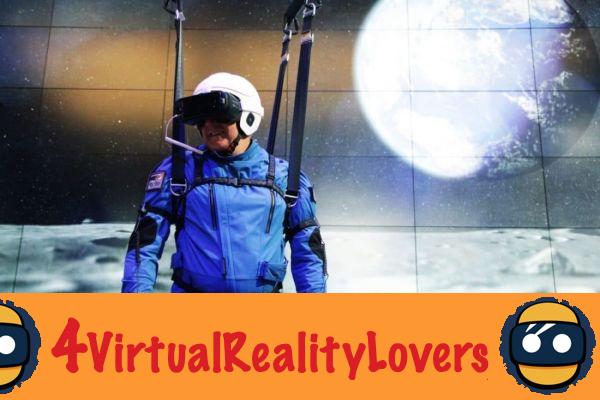 The 20 July 1969, Neil Armstrong walked on the moon as part of the Apollo Program. In a little less than a year, it will therefore be half a century since humanity has succeeded in setting foot on another planet. A big step for humanity, and therefore an anniversary that we should celebrate with dignity.

For the occasion, Samsung has partnered with NASA's Johnson Space Center, located in Houston, Texas, to create a new kind of virtual reality experience. Entitled "A Moon For All Mankind" (a moon for all mankind), this experience offers the user to experience realistically the sensation of leaping on the surface of the moon.

To do this, the Samsung Gear VR headset is combined with the ARGOS system (Active Response Gravity Offload System) from NASA. This system looks like a harness coupled with a flight suit, programmed to accurately simulate the moon's gravity level.

In the virtual reality of Gear VR, the user aims to accomplish a mission to the moon like a real astronaut. Most likely not all of us will have the chance to travel in space in our lifetime, but this experience is certainly the closest thing to it right now.

However, to try "A Moon For All Mankind" you will need to visit au Meatpacking District de New York City, in the USA. This is where the experience is installed for the moment. It is not known whether Samsung and NASA subsequently plan to offer their concept elsewhere in the world (and in particular in Europe).