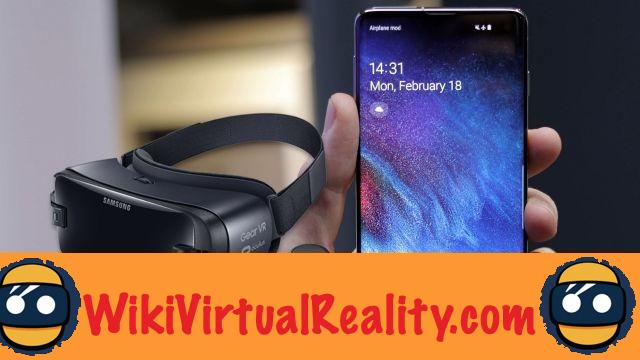 On the evening of February 20, 2019, Samsung finally unveiled its new line of smartphones comprising the Galaxy S10, Galaxy S10 +, Galaxy S10e and Galaxy S10 5G. Good news for VR fans: the manufacturer confirms that all these new models are compatible with the Gear VR headset.

As a reminder, the Gear VR is a virtual reality headset for smartphones. designed by Samsung and Oculus and originally launched in 2014. It only works when you insert a Galaxy smartphone into the slot provided for this purpose, since the headset uses the screen, power, sensors and battery of the phone.

With the emergence of autonomous headsets like Oculus Go and Oculus Quest, we might have thought that Samsung would ditch its Gear VR. It will not be. The latest version of the Gear (SM-325), available since September 2017, is therefore now compatible with all Galaxy S from 6 to 10.

Among the novelties brought by the ”dynamic AMOLED display” screen of the Galaxy S10, we can mention HDR10 + for brighter, more detailed and realistic content display. It is not known whether this new feature will be usable for VR, but it could be particularly interesting for watching movies in virtual reality with the Gear's cinema mode.

The Galaxy S10 5G differs from the other three smartphones in the range by its 5G connectivity. However, many experts agree that VR will be one of the main use cases of 5G. During MWC 2019, South Korean operators KT and SK will also present multiplayer VR games designed for 5G smartphones.

Indeed, the increase in bandwidth could make it easier to stream 360-degree VR videos. It could also allow you to play VR games with graphics worthy of PC games rendering on the Cloud rather than harnessing the power of the smartphone. However, we will have to wait until 5G is actually available in France to see if the Gear VR will take advantage of these possibilities.

Unfortunately, knowing that the Gear VR is initially designed for smartphones with a 16: 9 screen, the 18: 9 screens of these new models are not fully exploited. In fact, with the S10, S10 + and S10 5G, the definition of the Gear VR will be 1280 x 1440 per eye, as was the case with the old models. The definition is therefore similar to that of the Oculus Go. With the S10e, the definition should be 1440 × 1080 per eye as on an Oculus Rift.

'Agent Emerson' a VR thriller to launch in November ❯