The world of music has already played the card of augmented reality, especially on Snapchat. However, Facebook really does seem to have a card to play and shows it with Slipknot and Gins n'Roses.

What do Ariana Grande, Drake, Slipknot Slipknot and Guns n'Roses have in common? These are all groups that play the card of augmented reality to make their musical and above all visual identity heard! 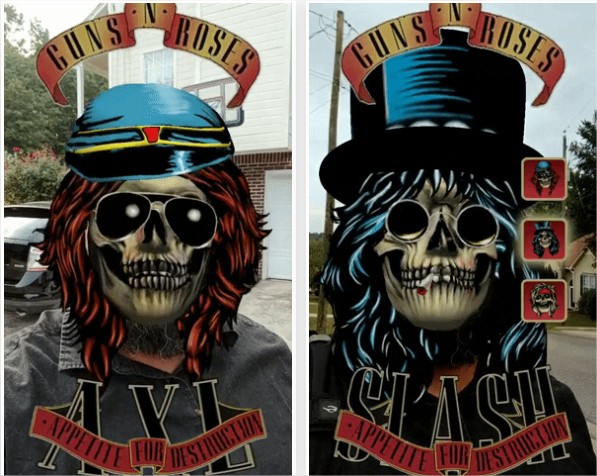 Slip into the shoes of Slipknot and Guns n'Roses singers

It was Slipknot who launched the phenomenon first to ensure the promotion of their next album "We are not your kind" which hits stores on August 9th.. The idea is quite simply to use Facebook Spark, the augmented reality platform, by offering their fans to slip under the mask. An obvious reference to the rather creepy nine masks that the band members wear on stage. They are all available in the augmented reality experience. As a bonus, the single "Unsainted" is heard.

On the side of Guns n'Roses, it is to ensure the promotion of "Appetite for Destruction", a classic of the group which has the right to an extended edition and especially remastered. The augmented reality experience invites you to “GnFnr” (try to pronounce it) with masks of Axl Rose, Slash or even Duff McKagen. The visuals are the same as those that appear on the cover of the album. A very successful concept that should appeal to fans of these bands. There is no doubt that other groups will also be doing it in the future.